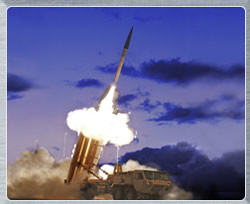 The Aegis BMD ship has two types of defensive ballistic missiles; the Standard Missile-2 (SM-2) for terminal defense of a small area inside the atmosphere and the Standard Missile-3 (SM-3) for short- and intermediate-range mid-course defense of a much larger area and in space outside the atmosphere. These defensive missiles are connected through a computer processor fire control unit, currently labeled the Aegis BMD 3.6.1 configuration which also connects directly to the AN/SPY-1 Radar on the ship that searches and tracks wide areas for incoming ballistic missiles targets. The Aegis BMD 3.6.1 configuration is fully automatic once activated, providing computer algorithms that produce firing solutions that are executed through  processor integration with the AN/SPY-1 Radar to the SM-3 and SM-2 missiles prior to launch and during the flight of these missiles until intercept.

While on their missile defense mission the Aegis BMD ships predominately operate on their own rather than with the battle fleets around an aircraft carrier because their patrol areas are limited by the geometry and physics of the ballistic missile threat they have to defend against. In addition to supporting the fleets, the Pearl Harbor based Aegis BMD ships provide the testing platforms for the most current and future Navy missile defense capabilities being developed. The USS Lake Erie (CG-70) Aegis cruiser is the primary ship platform for the U.S. Navy to continually test and demonstrate new capabilities at the Pacific Range Missile Facility (PMRF) in Kauai, Hawaii.

Future Aegis BMD ships along with currently deployed BMD ships will be equipped with faster processors over time, a 4.0 configuration being tested now and eventually a 5.0 deployed in 2013. This will reduce processing time considerably, allowing the ship to track and engage more missiles while performing other necessary missions at the same time. More capable and faster defensive missiles as well as dual-band tracking technology to allow off-ship sensor integration that would extend the range and confidence of the defended area are being developed. These include the SM-3 Block 1B and the SM-3 Block 2A under a "launch on remote" capability.

The U.S Navy will own the largest floating X-band radar called the Sea-Based X-band Radar (SBX), currently based in Pearl Harbor. The radar is a vital sensor linked to the Ground-Based Interceptors in Alaska and California for the protection of the U.S. homeland. The SBX has been successfully linked to the fire control system of the USS Lake Erie as the ship intercepted a falling toxic satellite with a SM-3 missile in February,

2008. The Navy will also play a major role in the new Aegis Ashore System proposed by President Obama, as the system will be developed and tested at the PMRF in Kauai.

We are fortunate as a nation to have a state such as Hawaii to provide the U.S. Navy with numerous assets and strong support for their vital mission of missile defense, providing peace to our world through dissuasion and deterrence.

It is with great honor and great respect of our United States Navy to have had the opportunity to tour and visit with the Sailors and Officers of the USS Hooper (DDG-70) and the USS Lake Erie (CG-70) in Pearl Harbor, Hawaii.

Missile Defense defends and protects our nation, our deployed military forces and our allies against current and future proliferating missile threats from hostile countries and entities.

Today's missile, rocket, and mortar threats to our armed forces deployed throughout the middle East are severe and growing.