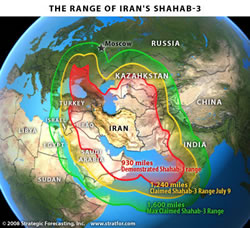 Today's missile, rocket, and mortar threats to our armed forces deployed throughout the middle East are severe and growing. The number one killer of U.S. troops on forward operating bases is rocket and mortar fire. Iran continues to test and deploy vast quantities of short-and medium-range missiles that are within the hundred-mile range and beyond of our thousands of men and women serving the United States military in forward operating bases around the Persian Gulf. To this extent, MDAA has submitted a brief educational paper on U.S. Army needs for protecting our men and women overseas. It is included below for your review and understanding.

The ballistic missile arsenals of Iran and North Korea directly threaten U.S. bases in Iraq, Kuwait, Bahrain, Qatar, United Arab Emirates (UAE), South Korea, and Japan. In 2010, South Korea reported a North Korean arsenal of 1000 missiles, a 25% increase over the past two years. The country has also greatly expanded its uranium enrichment program. The Iranian ballistic missile arsenal is upwards of 600 missiles and growing. In July of this year, Iran tested 14 missiles at the same time, proving the coordination and salvo/raid capability to overwhelm U.S. and allied defenses. Moreover, the rocket and mortar attacks against forward operating bases in Iraq and Afghanistan remain the number one killer of U.S. deployed soldiers. Long-range ballistic missile programs are being developed and tested by North Korea and Iran with potential capability to strike as early as 2015, as stated in congressional testimonies by the current administration. In addition, Israel remains threatened by short-and medium-range ballistic missiles from its neighbors in the region; the United States has a responsibility to defend Israel.

There are seven major Army Air Defense Artillery (ADA) systems and one Space and Missile Defense Command /Army Strategic Command (SMDC/ARSTRAT) system. Five are deployed today in EUCOM, PACOM, CENTCOM and NORCOM, and two other systems will soon be deployed to those regions. Three systems are still in development and testing stages, including the Ground-Based Midcourse Defense system (GMD).

Soon to be deployed and transitioned over to the U.S. Army:

Development and Testing Stage: Systems too premature to be turned over to the U.S. Army.

Riki Ellison one of the top Missile Defense Experts in the World, is Founder and Chairman of MDAA. He has more than twenty five years of experience as an advocate for the Deployment and Development of a Missile Defense System for missiles of all ranges.

Missile Defense defends and protects our nation, our deployed military forces and our allies against current and future proliferating missile threats from hostile countries and entities.

The United States Navy is the strongest proponent for the global missile defense mission amongst the branches of the U.S. military. Out of the Navy's core missions only the attack air strike and strategic nuclear capability does not involve missile defense.