Prevention and Management of Torso Reflex 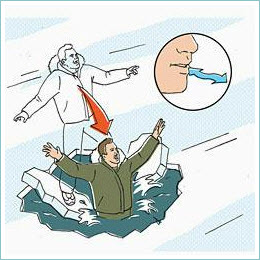 Torso Reflex, also known as Gasp Reflex , Inhalation Response, or Cold Water Shock, is caused by sudden immersion into water colder than 70 degrees F. Sudden immersion into cold water triggers an involuntary reflexive torso gasp that can cause the person to aspirate water into his/her airway and lungs, which can lead to laryngospasm, disorientation, panic, and the loss of any physical ability to swim or remain afloat. (Note: Largyngospasm is an uncontrolled/involuntary muscular contraction (spasm) of the laryngeal cords, which temporarily prevents the person from inhaling.)

This automatic physiological reaction causing involuntarily gasps, is a reflexive sucking in of air in an attempt to rapidly increase oxygen intake into the lungs. This increases the body's metabolic rate, building internal warmth in response to the cold. When jumping into cold water with the face unprotected, the sudden urge to breathe deeply in response to the torso reflex may cause the person to inhale with the mouth underwater. If so, the person inhales/aspirates water rather than air into the lungs.

This rapid and uncontrollable gasping can last from 1 - 3 minutes. And, if you gasp while your mouth is underwater, as cold water is drawn into the windpipe and lungs, the largyngospasm then occurs. Even if you manage to get your mouth above water, you may still not be able to clear the water from your mouth and airway to get enough oxygen.

During spring and early summer, there are numerous fatal and non-fatal submersion incidents that occur when people jump into the water from a dock, pier, or boat in order to cool off. Even though the air might be in the 80's or 90's, the water might still be in the 50's or 60's.

The following is an example of a recent incident that occurred this past weekend in Massachusetts:

WESTFIELD, Mass.-A West Springfield man has been identified as the victim of a drowning in Hampton Ponds.

The Northwest District Attorney's Office has identified the man as 46-year-old Nicolae Ulinici.

Ulinici is believed to have entered the water from a boat on Hampton Ponds' Middle Pond on Saturday. He did not resurface. People he was with reported his disappearance shortly after 3:15 p.m.

The Springfield Republican reports ( http://bit.ly/P7cK1p) that law enforcement officers searched for him until dark Saturday and then resumed their search Sunday morning. Ulinici's body was found about 9:30 a.m.

We can only speculate that Torso Reflex was the cause of this unfortunate incident. But, the sudden entry into cold water will make an individual involuntarily gasp. And, unless his airway is protected by covering the mouth and nose with one or both hands, the person will involuntarily gasp when his chest and face hits the cold water causing the person to aspirate water into the airway and lungs. This will then cause the larynx to spasm, preventing the person from breathing. And, unless the person's lungs are filled with residual air, the victim may not surface and will continue to submerge as he deteriorates into a deeper state of hypoxia and unconsciousness. After the onset of respiratory arrest and unconsciousness, the heart may continue beating for up to several minutes before the onset of cardiac arrest.

The initial immersion in cold water also causes a sudden constriction of surface blood vessels which causes an immediate jump in blood pressure and heart rate. If your heart cannot handle this jump, it stops and you die. This seldom happens in healthy and fit people, but the danger is still there.

To prevent Torso Reflex, fully cover your mouth and nose with your hand(s) prior to entering the water. And, don't release the cover until you have re-surfaced and your mouth is clear of the water surface. Also, when entering, lean backward, which will reduce facial contact during sudden immersion into the water. The procedure of covering the mouth and nose with the hands should be taught to all swimmers, recreational boaters, and rescue personnel subject to entering cold water. This procedure should become instinctive and should be maintained until the rescuer regains a horizontal position on the surface with his face out of the water.

And, always wear a lifejacket, especially when boating on or entering cold water. Keeping the cold water off your face and head may lessen the gasp reflex. Wearing a lifejacket, before entering the water, will help keep your face and mouth out of the water. And, even if you experience torso reflex, the lifejacket will keep you at the surface for immediate rescue by others.

What kind of lifejacket is best? The one you wear!

All public and semi-public aquatic facilities should be equipped with appropriate spinal immobilization devices (SIDs), in addition to cervical collars, lateral stabilization items (i.e. blankets, towels, sand bags, and so forth), and appropriate immobilization material (i.e. straps and bandages).

Because of the major health concerns today, there is a major reluctance among emergency service personnel to perform direct mouth-to-mouth rescue breathing on an unknown victim.