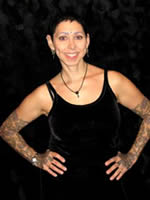 Elayne Angel has over 20 years of extensive experience in the Body Piercing Industry. She is known as a pioneer in the field, and a consummate professional revered for knowledge, skills and ethics in the areas of Piercing Techniques, After Care and Healing, and Placements. Ms. Angel has performed over 40,000 piercings since her career began in the 1980s, when she became manager of the first piercing specialty studio in the United States.

Ms. Angel is the author of The Piercing Bible--The Definitive Guide to Safe Piercing and the President for the Association of Professional Piercers (APP). Ms. Angel owned and operated her own studio in New Orleans for over 12 years, but closed in the aftermath of Hurricane Katrina. It was the only licensed body art studio in the French Quarter. She also helped to promulgate legislation and train health inspectors on piercing and tattooing for the state of Louisiana.

Awards & Contributions:Medica Coverage & Recognition:
• View Elayne Angel's Curriculum Vitae
• More on Elayne Angel's Experience
The Piercing Bible
Elayne Angel
Piercing pioneer Elayne Angel has performed over 40,000 piercings since the 1980s and has brought many practices, such as tongue-piercing, into the mainstream. She brings her exhaustive knowledge to this groundbreaking manual that covers everything you need to know about the process, including. . .

The Propeller Handbook: The Complete...

A Woman's Odyssey Into Africa: Tracks...