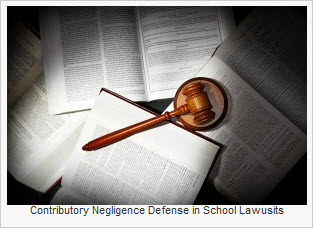 Student injury or death often brings negative attention to a school. In fact, the first thing often reported publicly is an injured party's claim that an incident stemmed from the negligence or misconduct of a staff member responsible for a child's safety - a teacher, coach, or bus driver, for instance. But a student injury or death can result from any number of situations. These might range from school-related action or inaction, such as a breach of school security or failure to follow a student's medical orders, to a student's own actions and choices triggering a contributory negligence defense.

Consider these examples: A child runs into a street without a crossing guard present and is hit by a car; a teenager is shot by a rival gang member after his teacher sent him to a nearby restaurant to get her a sandwich; a boy sneaks into a restricted area of a building and falls through a ceiling; students drown in a river after taking boats out at night; and a girl on a skateboard flies off a ledge in a school parking lot. Any one of these cases could result in a liability lawsuit. But a determination of the facts may also show contributory negligence and produce strong defense against a liability claim.

The strength of a defense is determined by examining the four elements of negligence: (1) Duty to protect. Was a duty owed to the student? If it can be argued that no duty existed at the time of the injury, then a defense may be very strong. (2) Standard of care. Was reasonable care exercised in protecting the health, safety, and welfare of the student? If the school adequately instructed and warned students about a danger but a student purposefully disregarded these admonitions, a defense of contributory negligence might prevail. (3) Proximate cause. Was the injury or death directly related to something the school did or failed to do? If a school's actions or inaction cannot be demonstrated as a proximate cause of the incident, there is a strong defense. (4) Actual injury. Even if the school breached a standard of care requiring specific safety measures, lack of an injury will contribute to the defense of the lawsuit.

This article will use a hypothetical case to demonstrate how the concept of contributory negligence may serve as a defense against liability and help plaintiff and defense attorneys assess the merit of a suit or the strength of a defense.

Determining if Contributory Negligence Applies as a Defense

A suburban junior high school warned students on a regular basis not to ride skateboards on school property. The principal made several such announcements over the public address system at the beginning of the school year. She also posted fliers around the school, gave one to each student in homeroom, and sent one home to parents. The announcements and fliers explained the dangers of skateboarding in the school parking lot because of the proximity of utility poles in the lot and a steep slope adjacent to it - all of which posed a threat of harm to a student who is unable to control a skateboard. The school posted signs in the parking lot reading "Danger - Skateboarding Prohibited."

In the early morning hours before school, a group of seventh graders brought their skateboards to the parking lot and rode around. Five minutes later, one of them veered over the edge of the steep slope, crashing and seriously injuring her head. Another skateboarder called 911. EMTs treated the student onsite and transported her to a hospital. After three weeks in a coma, she died.

Our hypothetical case has the markings of a wrongful death lawsuit and a vigorous defense. In the context of the elements of negligence, let's examine what plaintiff and defendant attorneys should consider.

The next element to review is whether the school exercised reasonable care to protect its students. In our example, the school made clear to students that they were prohibited from skateboarding in the parking lot. The school also posted warning signs there. Plaintiff and defendant attorneys should examine whether school's recognition of the danger was sufficient to protect students from harm. What did the school communicate to students? Were warnings adequate? In this situation, it's likely that the school will argue successfully that it recognized the potential for danger and exercised reasonable care to protect students from harm.

The next question to answer is whether the student contributed in any way to her injury and death. Is it reasonable to consider that this girl would have understood the warnings but ignored them? In Russell v. Board of Regents of the University of Nebraska (423 N.W.2d 126 [1988]), the Supreme Court of Nebraska ruled that "One who is capable of understanding and discretion and who fails to exercise ordinary care and prudence to avoid dangers is negligent or contributory negligent."

In determining whether contributory negligence applies, an attorney should consider three factors:

(1) Physical facts - the extent to which a hazard is noticeable and the degree of alertness called for by surrounding circumstances to avoid such a hazard. (2) The action taking place - the movement, sound, and physical activities of both the individual who was hurt as well as those of other people and objects in the vicinity. In other words, what distractions may or may not have influenced the chain of events? (3) The characteristics of the student who was hurt - age, intelligence, experience, knowledge, physical condition, or other factors that would influence a student's ability to detect dangerous conditions or appreciate the hazards involved.

The third factor leads us to an important question: Is it possible that, because of diminished capacity, the student in our example would not be able to understand the dangers of riding a skateboard in the parking lot? Even with clear warnings about the potential for injuries when directions are not followed, some students may not understand how to keep themselves safe from harm. Assessing whether a school's notice of danger was reasonable in this context can weigh heavily for or against a defense.

School Liability and Duty of Care

Let's conclude our example with an analysis of the facts.

Did the girl have the capacity to protect herself from harm? Let's assume that the girl was 13 years old and in the advanced math/science track. Her IQ was above average and she didn't have any known learning disabilities. Clearly, she would have been able to understand the principal's announcements, read the fliers and the warning signs, and act in a way to prevent herself from injury by skateboarding in the parking lot.

Were the dangers in the parking lot clear? The slope was obvious to anyone near the edge of the parking area. The utility poles were noticeable to any person in the lot. The school posted numerous signs forbidding students to skateboard in the parking lot, and any reasonable person would see the signs. Several signs were posted near the slope and at entrances to the lot from various roads and walkways. The hazards, it could be argued, were clear to a reasonable student of the same age and capacity.

Did the school adequately exercise its duty to protect? In our case, a defense attorney may have a strong argument that the school acted appropriately under the circumstances - and that the student did not. The student had the capacity to understand that if she acted in a way counter to the school's warnings, she risked placing herself in harm's way. The student had a duty to protect herself from harm. Through her actions, she contributed to her own injury and subsequent death.

What was happening at the moment of injury? The girl and her friends were skateboarding in the parking lot - an action that was prohibited. There were no distractions in the lot that would have rendered her unable to control her skateboard before she went over the edge of the slope. In fact, it was learned that the injured student purposefully headed toward the slope while telling her classmates, "Look, I'm going to skate to the bottom!"

Not all liability claims are so clear-cut, and other intervening variables may warrant consideration when assessing a case involving student injury or death. Our example, however, provides a format for a plaintiff attorney to consider the merit of a case or for a defense attorney to evaluate the strength of a contributory negligence defense.

Determining the extent to which a person may be responsible for his or her own injury is critical in the school context, where the school is obligated to protect the health, safety, and welfare of students. Because of age or disability, some students may require greater supervision than others. Some students are bright and can understand the dangers that await them if they ignore warnings and choose to take a risk that could lead to injury. Two key variables in cases involving student injury and death are whether a school's warnings to students about the dangers and risks were adequate and whether a student had the capacity to understand those warnings. When the answer to both is "yes," then an examination of whether the student may have contributed to his or her own injury is warranted. The student's actions may prove to be a strong defense against a liability suit.

Abstract: This special paper introduces the Individuals with Disabilities Education Act, describes the school district's obligation to advocate for students with disabilities, reviews student rights created by the law, defines key terms, and takes the reader, step by step, through the procedural protections provided by the regulations.

Parents send their children to school expecting that their kids will be safe. The parents trust that the school's staff will act in their place and look out for their children's welfare in the same way they would. The presence of security guards, school police, or resource officers at the school may even strengthen their trust, but this can be a false sense of safety. Just because guards and school police officers wear a uniform does not always mean additional protection for students. Reviewing and assessing the potential for harm to students and others on school grounds and at school-sponsored events requires careful consideration and proactive initiative to keep students safe, even when the presence of a security guard or school police officer may provide a veneer of safety. Inadequately screening, training, and supervising security guards and school police officers; failing to provide guards and officers with clear instructions for handling special circumstances known to the school; and inappropriately delegating the responsibility for keeping children safe can all be linked to student injury or death.