Background of the case

The divorce had been finalized 15 years earlier. The husband had moved on with his life. He was happily remarried and enjoying his retirement years. The ex-wife could not let go. She sued in the Superior Court of Los Angeles claiming the husband would not relinquish rights to real property and other interests that had been part of the divorce settlement.

One interest she claimed was the husband's portion of real property which remained in both of their names. She had filed a notarized interspousal transfer deed with the County of Los Angeles, California. The deed transferred his interests to her. I was retained by the husband's counsel to determine the authenticity of the deed.

The wife represented herself as plaintiff.

The judge allowed me to use his courtroom during lunch break to examine the interspousal transfer deed. This meant the time permitted to perform the examination was very limited as court would reconvene after lunch, regardless whether I finished the examination.

I brought a portable digital flatbed scanner and the digital microscope to capture images of the documents. Both obtain power directly from USB port on the computer.

Obtaining high quality images is very important to perform a forensic document examination . Especially since I had one opportunity to examine the documents. The documents were scanned at 800 pixels per (PPI) in 24 bit color to TIFF format. The reason for scanning to TIFF format is this format retains all data. In digital imaging parlance it is called non-lossy. Other formats such as JPEG and PDF compress the data and are called lossy format. Scanning black and white documents in color is important for later examination on the computer. The color images retain more detail than black and white images.

It was important to capture as much data as possible from the documents both the front and back sides of the documents were scanned. This included any possible anomalies in the paper and printed text. The file for each scanned page is approximately 175 megabytes in size.

Due to time constraints, I could not image the documents using the digital microscope.

Upon returning to my office, I used Adobe Photoshop CC© to examine the interspousal transfer deed in question and other documents. The objective of the examination was to determine whether the deed is an altered document or it is a legitimate document.

Two deeds appeared to have identical attributes. These attributes included notary stamp location and the signature form and location on each. The deeds were for the same property address.

The next step was to determine how one document might be created from the other. 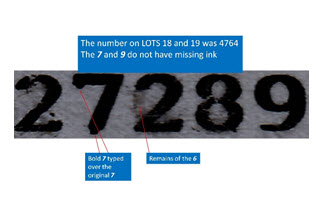 Adobe Photoshop CC provides a tool for high level of magnification of an image. Because the image was scanned at high resolution to TIFF format, I examined details of the deeds. Examination of the front of the deed in the lot and track numbers revealed other numbers had been present below the existing numbers. Anomalies existed in the appearance of the existing numbers on this deed.

Ink was missing in some areas because the original numbers were removed from the photocopy using a sharp instrument. This removal disturbed the paper fibers causing ink not to adhere in certain areas when the new numbers were printed on the page. Because the number seven was the same on both deeds, it was not removed. In the number seven, we can see remnants of the original seven protruding at the top left and bottom of the number seven. The number nine was added to the end of the string of numbers.

The back of the deed helped tell the story

Examination of the rear of another section of the document shows how the altered document was created. The rear shows protrusions resulting from removing the original numbers from the front of the document. The raised number 51 followed by a comma are readily seen in this image from the back of the document. These are the remnants of the original number 51. The number 51 was scraped from the page causing a protrusion to the rear of the page. The new number 750 is visible on the front of the page.

The Court ruled the deed in question was fabricated from the legitimate deed. The husband's interest was returned to him. None of the other deeds challenged by the wife were transferred to her.

According to Consumer Product Safety Commission (CPSC) accident estimates, tens of thousands of stepladder accidents requiring emergency room treatment occurred annually in the United States. Approximately 85-90% of these accidents involve the user falling from the ladder and 8-9% of these injuries are serious enough to require that the victim be admitted to a hospital. In addition to posing a severe health concern, these accidents have significant loss-of-wages and high medical expense implications.

Analysis and Testing in Accident Reconstruction

Persons with no training in engineering are generally unaware of the nature of engineering analysis, and so tend to assume that testing, as a means of determining the causation of accidents, is a dominant tool of the engineer. In the following examples, we shall undertake to explain the nature of engineering analysis, and to show that it is more basic than testing because testing without analysis is meaningless. Further, while analysis is always necessary in accident reconstruction, testing is only sometimes necessary.

Second to automobile accidents, accidents due to falls are the leading cause of injury and death. Of these, accidents due to slipping (not tripping) form a large proportion. Slipping may occur on floors, walkways, and stairs or steps. For Introductory purposes, however, the present discussion will be limited to slipping on flat surfaces such as a floor or sidewalk.