According to Consumer Product Safety Commission (CPSC) accident estimates, tens of thousands of stepladder accidents requiring emergency room treatment occurred annually in the United States. Approximately 85-90% of these accidents involve the user falling from the ladder and 8-9% of these injuries are serious enough to require that the victim be admitted to a hospital. In addition to posing a severe health concern, these accidents have significant loss-of-wages and high medical expense implications.

Having investigated numerous stepladder falls over the years, we have found it very common to learn that ladder accident victims are unaware of the cause of their falls and it is typical for them to respond to questions regarding causation with answers such as: "The ladder just gave way", or "It was sudden, I don't know what happened", or equivalent statements. One possible cause of such accidents is associated with use of the common four legged A-shaped stepladder, which can easily be accidentally positioned such that only three of its legs are contacting the ground. This situation can also go unperceived until it is too late to avoid an accident.

Three-leg contact can develop under a number of situations such as set-up on an uneven surface or when climbing, sliding, pivoting or "walking" a flexible ladder along the ground as the user's work progresses. Dr. John Morse has cited a subtle type of unperceived three-leg stepladder contact named "Type-II racking", which occurs during climbing as follows. After the climber has one foot on the floor with his other foot on the first step, and one or both hands on the front rails at chest height, he pulls himself upward with one arm and attempts to keep his body straight. This imposes a torque about a vertical axis to the ladder. This torque, combined with the climber's pulling force (which is necessary to raise his weight to the next step), tends to unload the rear legs. With these legs offloaded, and while this torque is still applied, the ladder twists or "racks" in the direction of the applied torque. When the climber's foot then leaves the floor and reaches the first step, weight is shifted back onto the rear legs of the racked (slightly twisted) ladder. When this occurs, only one of the ladder's rear legs can contact the ground. If this goes undetected, the climber has unknowingly created a three-legged ladder and the potential for instability, should center of gravity diagonal-crossover occur later after subsequent climbing or use.

The danger of falling arises when the unsuspecting climber shifts his center of gravity, causing the ladder's elevated rear leg, to impact the ground. This is likely to occur when the user lifts one foot while stepping from one level to the next or shifts his weight while working. When this happens, large and rapid forces and the user's overcompensating reflexes can cause him to lose his balance and fall.

In the sample test video linked here, a harnessed test subject climbed a 6 ft metal ladder, in the three-legged condition. The climber ascended the first step of the ladder and applied a hand force to the right side-rail, creating a three-leg stability condition. The climber then continued ascending, in a normal manner, to the fourth step. Upon reaching that step, the climber shifted his entire weight onto his right foot, which was located near the right side rail. This shifted the climber's weight over the diagonal stability line and the ladder moved suddenly. Once the ladder crossover motion was initiated, the climber attempted to maintain and regain his balance. 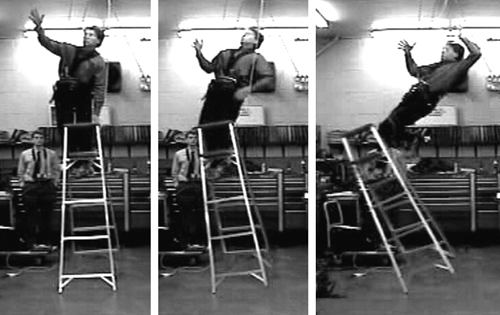 Based on our research, Type II racking can easily lead to the previously described three-legged condition, even when a stepladder meets the present ANSI (Type-I) racking standard. Based on dynamic testing, a vertical rear leg lift of as little as 1 inch is sufficient to cause a ladder user to fall upon unanticipated crossover. This scenario is consistent with many accident investigations and offers a likely explanation for stepladder fall accidents when there is no obvious cause. We have found that the minimum leg lift-off required to cause a ladder user to fall upon crossover is less than 1 inch and also depends greatly on the agility of the ladder climber.

Second to automobile accidents, accidents due to falls are the leading cause of injury and death. Of these, accidents due to slipping (not tripping) form a large proportion. Slipping may occur on floors, walkways, and stairs or steps. For Introductory purposes, however, the present discussion will be limited to slipping on flat surfaces such as a floor or sidewalk.

The divorce had been finalized 15 years earlier. The husband had moved on with his life. He was happily remarried and enjoying his retirement years. The ex-wife could not let go. She sued in the Superior Court of Los Angeles claiming the husband would not relinquish rights to real property and other interests that had been part of the divorce settlement.