Oral Cancer in the Dental Patient

As a disease, oral cancer is usually detected early and typically detected by dental professionals. Most patients are acutely aware of any problem in or around their oral cavity. Thankfully, these folks stop by to see the dentist, usually sooner versus later. Once in the dental chair, the dental professional can employ his or her superior knowledge of the oral cavity to render a diagnosis and appropriate referral as necessary.

Before one examines oral cancer, it is prudent to examine two more common conditions, which are considered precursors to oral cancer: leukoplakia and erythroplakia.

Leukoplakia is defined as "a white plaque that cannot be described otherwise." Its etiology can be trauma, tobacco or tertiary syphilitic glossitis. Clinically it is the most common oral precancerous lesion. Eighty-five percent of the patients diagnosed with oral cancer have been diagnosed with leukoplakia. Leukoplakia occurs typically in males more than females, and usually not until the fifth or sixth decade of life.

Leukoplakia locations vary. It may appear most anywhere in the oral cavity, but is most likely to occur on the vermilion of the lip, the buccal mucosa, and/or the mandibular gingiva. Of note, leukoplakia is much more likely to undergo malignant transformation in males over 40 years of age than females of the same age group.

Three histopathological grades of leukoplakia are Early, Moderate, and Severe. These grades are histopathologic interpretations of the degree of cellular dysplasia present in cancerous tissue.

The treatment for leukoplakia is to remove any obvious etiologic agent. Cessation of tobacco and/or alcohol use is highly desirable, but rarely accomplished. Lesions suspected, as leukoplakia should be biopsied to confirm the clinical diagnosis. After histopathologic confirmation, these lesions should be removed with a scalpel or a laser.

Since leukoplakia is benign condition, its prognosis is good. However, as stated earlier, the majority of leukoplakias become cancerous with the passage of time. Subsequently, close follow-up every three to six months after biopsy will remove what is mandatory.

Verrucous carcinomas an exophytic, well differentiated form of oral cancer. Like squamous cell. Carcinoma, its etiology is trauma, tobacco use, and viral. Clinically, it represents seven percent of all oral cancers. Verrucous carcinoma occurs most often in those individuals over the age of seventy. It is more common in men verses women. The most common location for verrucous carcinomas is the buccal mucosa and gingiva. Treatment involves surgical removal of the diseased tissue. If the cancer is detected early, prognosis is favorable following resection.

Oral cancer is most likely to occur on the tongue, floor of mouth, and buccal mucosa. On rare occasions does it appear elsewhere in the mouth.

Once oral cancer is diagnosed it is staged. The three factors involved in the staging process are tumor size, involvement of lymph nodes, and metastasis. The single most important factor in prognosis of a patient lies in early detection. The earlier the cancer is detected and treated the more favorable is the patient outcome.

Radiation alone has been proven effective in controlling and eliminating oral cancer in the early stages. It is delivered in divided doses to maximize its toxic effect on cancerous tissues while minimizing its effect on normal tissues. Radiation, especially in high doses, produces tissue fibrosis and scarring. Xerostomia secondary to destruction of salivary tissue is almost universal with radiation therapy and increases the incidence of caries in these patients.

Chemotherapy is often delivered to oral cancer patients as an adjuvent to radiation therapy and/or surgery. Sometimes chemotherapy is employed in attempts to decrease tumor size prior to surgery. If used during the immediate postoperative period, chemotherapy works to decrease the microscopic residual and micrometastatic disease. Lastly, chemotherapy for oral cancer can be employed as a palliative measure to attempt to improve the quality of the patient's life by decreasing pain and preventing obstruction of airway and/or esophagus. The most common chemotherapy agent employed today includes Cisplatin, Carboplatin, Fluorouracil and Methotrexate. All chemotherapeutic agents are associated with the undesirable side effects of nausea, vomiting, alopecia (hair loss), weight loss, bone marrow suppression, and xerostomia.

Surgical treatment of oral cancer varies widely and is dependent upon the stage of the disease at time of surgery. Smaller tumors can be removed easily with the scalpel or laser and leave a minimal defect. Larger tumors, and those tumors, in which there is lymph node involvement, require a much more aggressive surgical approach and typically leave a significant hard and soft tissue defect.

Treatment of dental patients suspected of having oral cancer begins with a through oral cancer screening where the hard and soft tissues of the oral cavity are inspected for any abnormal findings. If a suspicious area is discovered the dentist may elect to observe this area for up to a month, unless suspicion is high for oral cancer. The next step would be to have the area biopsied by an oral surgeon. Once the histopathological character of the tissue is discovered appropriate treatment can begin.

Dr. Lee (Mac) Whitesides, DDS, MMS is Board Certified in Oral & Maxillofacial Surgery. Dr. Whitesides is one of only two oral-maxillofacial surgeons in the United States who currently hold a Masters degree in Anesthesia and Oral Surgery. He has extensive experience with Distraction Osteogenesis for the Maxillofacial Skeleton, generating sufficient quantity of bone height and width to provide the appropriate foundation for Dental Implants. 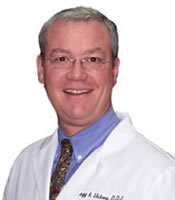 Patient presented to my office on 9/17/12 with the chief complaint of a recently placed crown on tooth #10 that had chipped. She said that the treating dentist, Dr. R, said that it could not be fixed and she would need to replace the veneer at her cost. Not satisfied with that response, she consulted another local dentist who gave her the same information. Still frustrated with her situation, she searched the internet and found an article that I published on repairing chipped porcelain.

General Anesthesia In The Dental Office

As dentistry becomes more competitive, dentists are increasingly looking at unique ways to separate their practices and develop a niche. One such niche lies in the offering of patients' sedation and/or general anesthesia, commonly called "sleep dentistry" during the dental treatment. Since studies show 30% to 50% of Americans avoid the dentists because of fear issues, providing such a service appears to serve a need.

Injuries to the inferior alveolar and lingual nerve continued to be a significant source of litigation for the dental professional. Approximately 10% of cases of dental malpractice are a result of nerve injury. Perhaps the genesis of the high number of lawsuits proportional to the overall number of surgeries lies in the sequelae of a nerve injury. The sequelae can range from relatively minor annoying numbness to intractable pain and the anesthesia to the area of the nerve supply.