The leader of a corporation or project is the individual who must ultimately be willing to take responsibility for results. Within the context of an organization or team made up of individuals, it is the collective performance of the individuals, as a team, that defines the results of the whole. While it can be said that the best motivation is internal motivation as opposed to external motivation, the leader is ultimately the one responsible for creating the conditions where motivation can thrive.

In any job, there are circumstances which motivate and those which demotivate. It is up to the leader to be aware of which is which. According to the Pareto principle (the 80/20 rule), it is essential for the leader to know what factors most contribute to results, to help guide his or her focus.

This article is a slightly modified chapter from my book, On Time and Under Budget: The Ultimate Power of Team Leadership, published in 2014.

Below is a list of motivating factors from a survey of twelve construction sites. If you work in construction, make sure that you have these things in place:

The demotivators, things to avoid and/or eliminate, are as follows:

In the construction industry, the Foreman Delay Survey is a way to identify and eliminate obstructive factors and demotivators. The following are the steps:

First, the foreman completes a daily survey of project delays for a week so as to identify what is causing the holdups.

Second, the delays are evaluated, solutions brainstormed, and improved working methods are implemented.

Finally, the results of the new ways are analyzed, and the cycle starts again, if necessary. 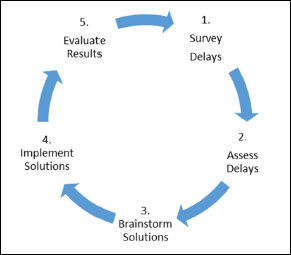 One might think that a good supervisor does not need to do this, but I have applied these principles to projects thought to be going smoothly and has always found that the Foreman Delay Survey makes a difference. Even the front-line foremen are surprised when they quantify their delays.

For example, on a recent project, I had a superintendent who, for some reason, did not want to hear about problems from the workers or the foremen. People were pulling me aside to tell me, the project manager, about problems they were having in the field. I noticed the superintendent's behavior whenever a problem was raised by someone under his command. He took it as a personal attack, instead of a call for help. This was an ideal situation for the Foreman Delay Survey. 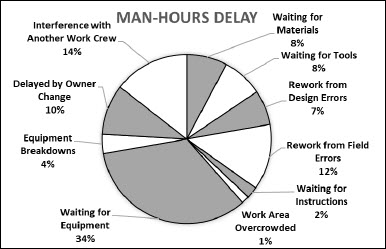 Figure 2 shows the results from the first week of that survey. The total delay time was 9% of the total available working hours. Frustrating delays can have a compounding effect on labor motivation. This is because as workers become more frustrated, they lose focus on safety and their jobs, leading to more frustration and more delays. In addition, frustration is one of the four mental states that leads to accidents. Most delays are management controlled, so management should use this technique as a listening tool to uncover problems. Once the problems are identified, the root causes can be identified and eliminated.

Having used this process on multiple projects, I have found that it takes about three weeks to achieve the organizational alignment necessary to eliminate most of the delays. The process should be used frequently, if not continuously, as a project moves through various stages. Most delays are management controlled, so it is absolutely critical that management uses this technique as a listening tool to uncover the root of the problems.

When combined with goal setting and the other principles, the Foreman Delay Survey is a simple and effective way to remove the problems, which lead to frustration and low morale, and consequently, a way of eliminating one of the root causes of accidents.

I have been the retained expert witness by both the plaintiff and defendant to determine the causes of a variety of significant injuries that have happened as a result of improper cabinet and millwork installation practices. In most claims, if product abuse or deferred condition was not the reason for the injury, poor installation practices that have omitted required hardware was to blame. Architectural millwork injuries have occurred repeatedly in shopping centers and malls, hotels, hospitals, airports, and offices throughout the country. Casinos and restaurants are also routinely the location of significant cabinetry related failures leading to serious injuries. Many offices and industrial buildings that utilize modular furniture have had employees injured by improper or completely unattached components. In my other articles, improperly attached architectural millwork has been discussed. Heavy mirrors and headwalls have fallen upon hotel guests while they were asleep in bed. Generally, these failures occur due to lack of appropriate fasteners, missed structural connections, or product tampering.

Introduction: In our first Volume of the Forensic Exchanger, we discussed some of the all too many reasons why HVAC systems fail. If you missed that edition and are interested in that topic e-mail us and we will gladly send it to you. We will follow up with more discussion of that important topic in later editions

ABSTRACT - This paper provides guidelines to commercial construction cost engineers for the development of a plan for obtaining and utilizing subcontractor cost information for use in bidding, procurement, scheduling, change order management, and claim management. The paper is based upon personal field experience gained in cost engineering, scheduling, bidding, planning, contracting, and claim analyses.