Ladder accidents occur frequently, often with very serious consequences. Ladders are tools that people use repeatedly, at home and on the job. The CPSC (Consumer Product Safety Commission) states that there are more than 164,000 emergency room-treated injuries annually due to ladders in the United States.

Other sources estimate more than 500,000 people annually are treated for ladder-related injuries. Approximately 300 of these injuries result in fatalities. Many ladder manufacturers continue to produce inferior, unstable, unsafe ladders.

Nearly all of these accidents are preventable. Some accidents are due to user error, but most can be attributed to defectively designed and produced ladders. This issue of Forensic Clues will inform you about the flaws in stepladders, and design solutions that could have prevented many accidents.

Stepladders are common household tools that are required in many different household maintenance and repair tasks. People are usually injured when a stepladder unexpectedly tips over, sending the user falling to the ground. This can occur due to material failure, a result of poor manufacturing processes and/or damage to the ladder. Stepladders also tip over when the lower leg of the front rail of the ladder fails, bending inward.

This is a very common characteristic found on injury-producing ladders. Racking produces increased stress in this area, causing failure of the ladder rail. 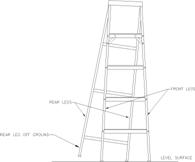 Figure 4: Stepladder in racked position while user is climbing the ladder

Safety Engineering Resources has worked on many stepladder cases. We have learned to easily identify design and manufacturing flaws, thanks to extensive research we have performed in the past.

Racking in step ladders can be greatly reduced at a relatively low cost, without interfering with the function or usability of the ladder. A stepladder was modified by adding two light chains connected diagonally between the front and rear rails of the ladder. Whether the ladder is folded or unfolded the chains are contained within the rails, and do not hang outside the ladder. Therefore they do not interfere with the ladder being climbed, transported, or stored.

With this simple stiffening device added, the racking characteristics of this ladder were much improved. 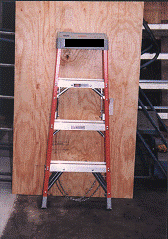 The modified ladder compared favorably with the data values for a very structurally sound stepladder on the market, the Leifheit ladder.

Most stepladder accidents are preventable simply by producing a structurally solid ladder that will not rack. Many of the stepladders currently on the market are not fit for use due to extreme instability. The ladder manufacturers have not met their responsibility to produce a safe product. Yes, stepladders will always be dangerous - the danger of gravity cannot be designed out - but there is no excuse for the danger of an unstable, structurally unsound stepladder.

Golf cart accident frequency has increased dramatically over the last 20 years. A study by Watson, Mehan, Smith, and McKenzie (Golf Cart-Related Injuries in the U.S., American Journal of Preventative Medicine, 2008) of NEISS data found 147,696 people were treated in emergency rooms for golf cart accidents between 1990 and 2006.

The most common crossing accidents are simple vehicle-pedestrian accidents where a car, SUV or pickup truck strikes a pedestrian. Because impact forces closely reflect the inverse of the square of the masses, no pedestrian is a remote match for even the slightest automobile traveling at a crawl. As a simple illustration, a 100-lb. pedestrian colliding with a 2000-lb. car will not experience twenty time the impact forces that the vehicle does.