A belief is a conviction adhered to often in the face of factual evidence to the contrary. This paper inevitably represents my beliefs moulded by my experience of working with teenagers in London and tempered by my knowledge of the work of my colleagues.

It is only by understanding the belief systems of the adolescent and his or her peer group that we can effectively interact with that young person in a way which has relevance and meaning. The very best of counselling, contraceptive, antenatal or any other service will fail if the client group, in this case the adolescent does not believe that he needs them.

Where do these beliefs stem from? (Fig. 1) Parental, cultural and religious beliefs and myths form a basis upon which more contemporary 'up market' beliefs are built....for instance the current peer group stance or the- 'dish of the day' in terms of the media 'hero'. Currently 16-year--old Tiffany is at number one in the pop charts encouraging secret sexual encounters:

"'Children behave' that's what they say when we're together... look at the way we have to hide what we're doing, and what would they say if they knew ... " 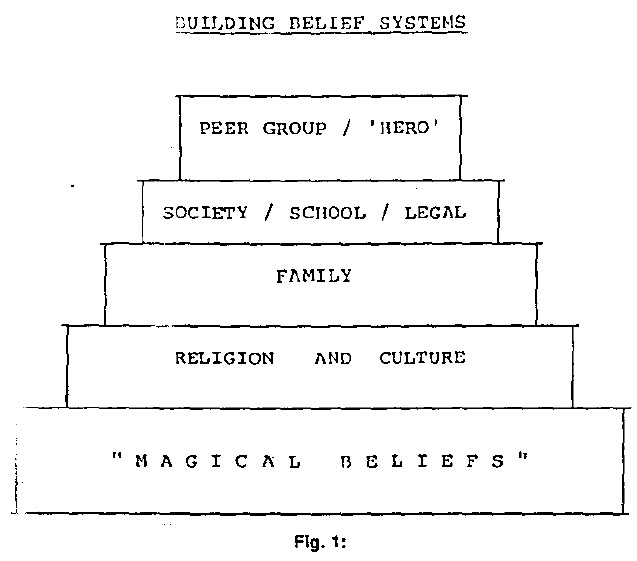 These belief systems, however bizarre and contrary to our own personal beliefs, are at least tangible: We can understand where they stem from and we can to some extent modify them with appropriate input in the style of cognitive-therapy, sex education, etc. In psychotherapeutic terms we can say that they are messages from the internalised parental ego state (transactional analysis) or superego (Freudian) whose intensity can be modified by educating or activating the adult ego state (ego) (Fig. 2).

For instance, peer group beliefs such as "You can't get pregnant the first time" or "It's OK if you do it standing up" can be confronted with factual knowledge such as 1 in 20 pregnant schoolgirls got pregnant as a result of the first time they had sex and sperm can swim up hill! 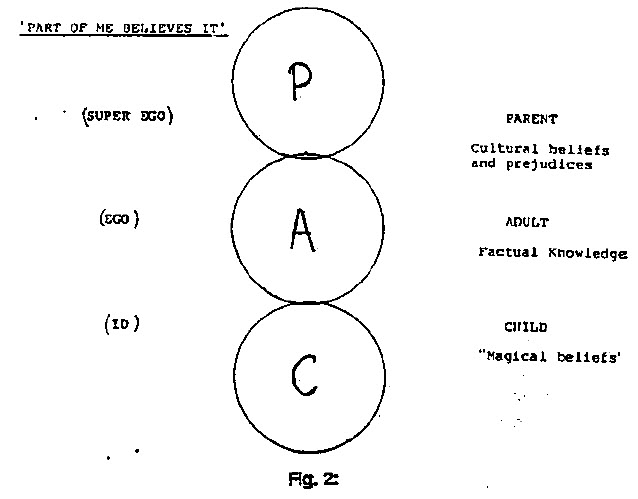 Unfortunately though, these beliefs can also be manipulated by pressure from less ethical factions such as pressure groups-attempting to 'sell' their own brand of quasi-religious dogma. In Britain we have had several such attacks on the adolescent's right to accurate information and free choice with regard to sexual decision making Pressure groups such as 'Life', 'The responsible: society', 'SPUC' (the society for protection of the unborn child) and the supporter.; of Victoria Gillick have enjoyed an enormous amount of publicity in campaigns to ban sex education in schools, to stop doctors prescribing contraceptives to under sixteens and to delegaIise abortion. The current campaign against termination of pregnancy waged by the MP David Alton is using highly emotive material such as engineered photographs of foetuses sucking their thumbs to hit at the belief system surrounding life and birth; to regard a fertilised ovum in the same light as a child and to brand all termination as murder.

At a deeper level are what I would describe as 'magical beliefs'. Intrinsic ideas with a high emotional content, a feeling of instinct and intuition and which may have no perceivable basis in current reality. These 'magical beliefs', acquired at a very early stage of development, may be ascribed to the child ego state (TA) or perhaps the Id (Freud). They are very firmly adhered to largely out of awareness and profoundly affect the individual's sexual and reproductive practices. Failure to understand such beliefs can entirely sabotage a treatment or contraceptive programme.

'Magical beliefs' centre on fundamental concepts such as feelings about self body and control and on the nature of life itself. The adolescent, during psychological development is much preocupied with the question "Who am I?" Confusion inevitably arises when "Who am I" becomes "Who are we?" Establishing a personal identity may be an almost impossible task for a pregnant adolescent who suddenly finds that her identity is changing beyond her control, she is no longer a 'little girl', she is a fertile woman. The role of mother is thrust upon ber before she has established her own identity, hence the belief that she cannot get pregnant and frequent denial of pregnancy.

"I knew about sex and how girls could get pregnant but I never though, it could happen to me."

"I thought I was too young to get pregnant, you don't think that a girl like me could end up pregnant, do you?"

"I never thought I could get pregnant."

Many girls deny they can become pregnant, they believe they are too young (Zelnick and Kanmer 1978). Belief in the impossibility of pregnancy can become almost a 'magical protectioun' like a lucky charm used against the evil eye 'well it won't happen to me'. These teenagers are still at the stage of concrete reasoning and cannot identify with the experiences of others (Blum & Resnick 1982; Piaget 1972; Coleman 1972; Babikian & Goldman; Luker 1976). This explains why health education methods based on 'shock tactics' do not work with this age group.

"My grandad smoked and he got cancer. I've been smoking since I was thirteen but I'm OK."

Diana Birch, MD, has extensive experience acting as an Expert Assessor and Expert Witness in a variety of Family and Child Care Actions both civil and criminal. She is very experienced in working with young people and families, particularly in child neglect and protection, family disturbance, substance abuse and domestic violence.

What We Have Learned: Experiences in Providing Adaptations and Accomodations for Gifted and Talented Students With Learning Disabilities

By: Robert A. Evans, PhD

Asylum Seeking Children - Including Adolescent Development and The Assessment Of Age

Children suffer the traumas and injustices of warfare and conflict without the ability to influence or control their circumstances. As refugees they become the flotsam of society drifting from one inhospitable country to another in search of safety. They have been with us for generations, their numbers fluctuating and their distribution changing as the adult world decides who to wage war on next.