Legal jurisdictions around the world differ as to the treatment of the liability and damages aspects of concurrent delay. To help unravel the complexities of this issue, the following topics are discussed in this article: 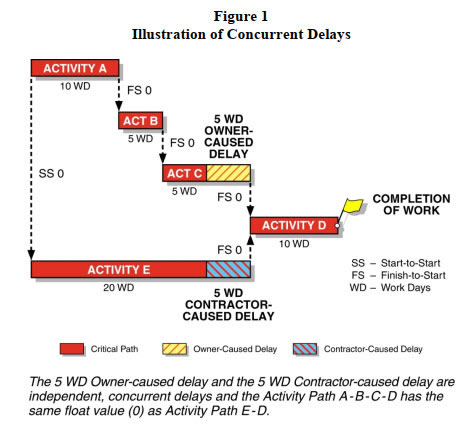 This situation is of significance when one cause of the delay is at the owner’s risk, while the other, competing cause of delay is at the contractor’s risk, and where both causes may be regarded as having caused or contributed to the delay on the project.

In this section, the common legal practices regarding the treatment of concurrent delay is summarized in the following jurisdictions:

U.S. courts and arbitration proceedings offer three approaches to the handling of concurrent delay: time but no money; apportionment; or responsibility based on a critical path delay analysis.

One author writes that the “time but no money” principle traces back to early 1900s U.S. cases when a strict rule against apportionment applied.7 In one case, the courts could not apportion “with any degree of certainty.”8 In another case, the court found that “where both parties to a contract are responsible for delay in its performance the court will not undertake to apportion the responsibility for delays.”9

The rule against apportionment was later abandoned because of the frequent use of liquidated damages clauses, the complexity of the contractual relationships, and a belief that the older rule was too harsh in its application.10 Thus, U.S. courts will apportion delay damages when evidence permits the segregation of costs resulting from each party’s causes.11 However, courts will not find for apportionment if the segregation of delay costs is impossible.12

Critical path delay analysis offers an alternative to apportionment in that it offers the best evidence of cause-effect analysis of time impacts, as explained in Section 4 herein.

Several cases are instructive as to U.S. law with respect to concurrent delay.

The contractor in Blinderman13 was seeking additional expenses and a time extension in respect of delays to the completion date. The contract provided that an adjustment should be made to the contract price for any increase in costs caused by suspension, delay, or interruption by the government, except where the works would have been suspended, delayed or interrupted by any other cause, including the fault or negligence of the contractor. The court found that the contractor contributed to the delays and held that:

Generally, courts will deny recovery where the delays are “concurrent or intertwined” and the contractor has not met its burden of separating its delays from those chargeable to the Government.

The ruling in Blinderman means that neither prolongation costs nor liquidated damages are recoverable where apportionment is not possible, so an extension of time will be granted in such a case.

In Beckman Construction Company,14 the contractor sought costs associated with delay. There were concurrent delays. It was held:

It was determined that the contractor bears the burden of proving, with a reasonable degree of accuracy, the extent of delay caused by the compensable actions of the government.

In Cline Construction Company,15 also involving a claim for delay costs where there were concurrent delays, it was held:

Concurrent delay does not bar extensions of time, but it does bar monetary compensation for daily fixed overhead costs of the type claimed by Cline because such costs would be incurred on account of the concurrent delay even if the Government responsible delay had not occurred.

…paints with too broad a brush. When it is reasonably possible to apportion the delay among the various causes, liquidated damages may be assessed notwithstanding concurrent causes attributable to both parties.

In William F. Klingensmith Inc.,17 the contractor sought a contract time extension plus impact costs where there were concurrent delays. It was held:

The general rule is that “[w]here both parties contribute to the delay, neither can recover damage[s], unless there is the proof of a clear apportionment of the delay and expense attributable to each party.” Blinderman, 695 F.2d at 559, quoting Coath & Goss. Inc. v. United States, 101 Ct.C1.702, 714-715 (1944). Courts will deny recovery where the delays are concurrent and the contractor has not established its delay apart from that attributable to the government.

In Rivera General Contracting,18 there was a claim for delay allegedly caused by the government. There were competing causes for the delay. The contract contained an adjustment of price clause similar to that in Blinderman. It was held:

Where Government caused delays are concurrent or intertwined with other delays for which the Government is not responsible, the contractor cannot recover delay damages. This principle applies equally to delays attributable to a change as to ordinary damages for delays.

Again, this is not inconsistent with Blinderman. On the facts, the delay events took place at the same time (i.e., there was “true concurrent delay”) and although the government admitted that it may have been partially responsible for some of the delays experienced, there was no evidence to demonstrate that the contractor had incurred any increased cost as a result of the governmentcaused delay. Therefore, there was no issue of separating the compensable from the noncompensable delay.

In Hood Plumbing,19 claims were made for delay costs and remission of liquidated damages. There were concurrent delays. It was held in relation to the claim for additional costs:

With regard to the remission of liquidated damages, it was held that the contractor’s delay exceeded the period of delay caused by the government and on that basis, liquidated damages could be assessed. This is not inconsistent with the principle that liquidated damages are not recoverable if delay cannot be apportioned; the assessment made in this case did amount to an apportioning of the delay.

Despite this finding on the facts, it was held that there was a concurrent delay and with regard to the assessment of liquidated damages, the court referred to the judgment in AMEC Processing Equipment Co. v. United States,21 which provided:


. . . Download PDF article to read the remainder of the article and all footnotes.

Richard J. Long, P.E., is Founder and CEO of Long International, Inc. Mr. Long has over 40 years of U.S. and international engineering, construction, and management consulting experience involving construction contract disputes analysis and resolution, arbitration and litigation support and expert testimony, project management, engineering and construction management, cost and schedule control, and process engineering. As an internationally recognized expert in the analysis and resolution of complex construction disputes for over 30 years, Mr. Long has served as the lead expert on over 300 projects having claims ranging in size from US $100,000 to over US $2 billion. He has presented and published numerous articles on the subjects of claims analysis, entitlement issues, CPM schedule and damages analyses, and claims prevention. Mr. Long earned a B.S. in Chemical Engineering from the University of Pittsburgh in 1970 and an M.S. in Chemical and Petroleum Refining Engineering from the Colorado School of Mines in 1974.

I have been the retained expert witness by both the plaintiff and defendant to determine the causes of a variety of significant injuries that have happened as a result of improper cabinet and millwork installation practices. In most claims, if product abuse or deferred condition was not the reason for the injury, poor installation practices that have omitted required hardware was to blame. Architectural millwork injuries have occurred repeatedly in shopping centers and malls, hotels, hospitals, airports, and offices throughout the country. Casinos and restaurants are also routinely the location of significant cabinetry related failures leading to serious injuries. Many offices and industrial buildings that utilize modular furniture have had employees injured by improper or completely unattached components. In my other articles, improperly attached architectural millwork has been discussed. Heavy mirrors and headwalls have fallen upon hotel guests while they were asleep in bed. Generally, these failures occur due to lack of appropriate fasteners, missed structural connections, or product tampering.

As your community or building ages, it will require an increasing amount of maintenance and large scale replacement or improvement projects will become necessary.

Changes can occur on almost every project and they often lead to delays and other negative impacts to the schedule and cost of a project. Large and complex engineering, procurement, and construction (EPC) projects are particularly susceptible to the negative impacts caused by changes. Changes can cause delay and disruption to engineering, procurement, fabrication, transportation and delivery