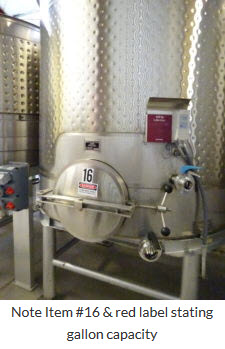 We've shared information about what constitutes an adequate asset list before and it's worth repeating that an appraisal lives or dies by the asset list. Let me share just a few experiences we've had lately regarding the correlation of asset lists and inspection efficiency and some suggestions for you to consider.

One important aspect of an inspection that's often overlooked is location of the equipment. For example, we recently inspected a 5 location cabinetry manufacturing business spread out along the central California coast. On the asset list provided, each location has its own list of equipment. Even better, those pieces of equipment were listed in the order in which we encountered them as we walked through the shop. In addition to setting up the asset list geographically, the business owner provided detailed and thorough information on all the equipment. He remarked that when he wasn't sure of a manufacture date, or purchase date, he was able to reconstruct the information from his accounting records. The inspection was completed entirely in one day, much quicker than expected!

Just a few weeks earlier, on the other hand, we'd attempted to inspect a food processing plant for a retroactive property tax appeal. The folks who provided that asset list had not taken the time to locate the machinery on the floor before we arrived and so we spent several fruitless hours wandering through the many different processing rooms with the plant manager and controller, trying to correlate the list with the equipment on-site. Many of the processing lines had been moved & reassembled from their original configuration, some of the equipment on the list had been placed into storage or discarded, and too many of the descriptions were vague or imprecise. Often we weren't sure which pie filler or mixer on-site correlated to the line items on the asset list.

You may have noticed that an important part of the inspection is the identification and verification of the assets. Location helps with verification but there are other ways to make verification easier as well. For instance, we often appraise farm equipment, trucking fleets, or construction equipment - mobile equipment. In such cases, it's impossible to align harvesters or concrete pumpers and cranes exactly with the asset list. The important thing is that the items on the list be easily verified with each physical piece. So if, for example, you have ID numbers on your equipment as many operations do, feel free to make a column on the asset list to note those numbers.

At a recent vineyard inspection for estate tax purposes, we saw 6 very similar Korvan grape harvesters, ranging from the 1999 model to 2013. The harvester chassis were numbered but there was not a corresponding number on the asset list so it took some time to determine which were which. Alternatively, during a large construction company inspection several years ago, every single large asset was numbered and the list provided included those numbers, making the match-up much quicker and efficient.

Another factor is that the descriptions make sense. You'd think this would be a given, but at one inspection for winery equipment appraisal, the descriptions for some of the wine tanks were in gallon, as expected, while others were by wine tank dimensions. The problem is that wine tank labels display gallons and winery staff are generally more familiar with wine tank capacities than dimensions. This kind of disconnect makes the equipment inspection process much longer and much more expensive. It turns out that the dimension descriptions had been transferred over from the General Ledger, which leads to the more general discussion of why general ledgers aren't the best source for asset lists.

Another difficulty occurs when the asset list is extracted from a company's general ledger. We discuss this in more detail here, specifically in regard to depreciation schedules. One problem with using a general ledger or depreciation schedule for an asset list is that the items on the list are often difficult to tie out to the equipment on-site. For example, at the aforementioned winery inspection, we had more entries than we'd like that read something like, "crush equipment ... $795,000" instead of lining out the separate pieces of equipment with their own costs. This is problematic on more than one level.

That last tip is obviously from my CPA training and you're welcome!


Jack Young, ASA, CPA is an Accredited Senior Appraiser (ASA) of the American Society of Appraisers specializing in Machinery and Equipment Appraisals and a Certified Public Accountant (CPA). Mr. Young has also been awarded a Master Personal Property Appraiser (MPPA) designation from the National Auctioneers Association. He has thousands of hours experience as an Equipment Appraiser and is an active member of the Northern California Chapter of the ASA, where he serves as Chapter President.

Let's say you're getting an equipment appraisal on your metalworking facility, your food processing plant, or a manufacturing facility, restaurant, or trucking company. When you think about how an equipment appraiser might research the values for your fleet vehicles, your kitchen equipment and dining room furniture, or for your CNC machines, drills, presses, etc., you probably assume the sales comparison approach. And in most cases, you might be right. But don't forget: Uniform Standards of Professional Practice (USPAP) recognizes three distinct valuation methodologies and it's important to consider all three before determining the correct approach for a particular appraisal. These three appraisal methodologies, or approaches to value, are Sales Comparison Approach, Cost Approach, and Income Approach.

A California client, one of the oldest continuously operated family-owned wineries in the country, wanted to review their equipment values with an eye toward possible property tax appeal. Including in the holdings were tanks, bottling equipment, support machinery and equipment including forklifts and wastewater systems, agricultural equipment, restaurant equipment and, of course, office and administrative equipment and furniture.

RN's Beverly McFarland and her associate, Kevin Whelan of The Beverly Group, Inc., recently gave a presentation in San Francisco to the Northern California Chapter of the American Society of Appraisers ("ASA") on "Challenges of Appraising Special Assets". The emphasis was on the appraisal of assets in chapter 11 bankruptcies and receiverships and the differences between the two entities and how they are administered. Through the new acquaintances that we met that evening, we discovered some fascinating appraisals that members of the ASA have completed that we would like to share with Receivership News readers.