A recent Donan forensic fire investigation found that a poor connection in a floor-mounted duplex receptacle was the cause of fire. The receptacle was located in the area of origin and all other identifiable causes were eliminated during the investigation. While conducting the research for this particular case, Donan investigators evaluated many scholarly sources in order to clearly educate the client on how a loose connection in a receptacle could lead to a structure fire which, in this case, nearly consumed the bedroom. The best explanation was found in the chemistry associated with the formation of an oxide that contributes to the condition.

National Fire Protection Association (NFPA) 921, states "When a circuit has a poor connection such as a loose screw at a terminal, increased resistance causes increased heating at the contact, which promotes the formation of an oxide interface. The oxide conducts current and keeps the circuit functional, but the resistance of the oxide at that point is significantly greater than in the metals. A spot of heating develops at that oxide interface which then becomes hot enough to glow. If combustible materials are close enough to the hot spot, they can be ignited. Generally, the connection will be in a box or appliance, and the probability of ignition is greatly reduced." [1]

Taking this conclusion a step further, Donan experts reproduced the mechanics involved in applying heat generated from a loose connection, to ignite surrounding combustibles. What followed was an experiment to better visualize glowing connections.

Setting Up the Experiment

The experiment consisted of two duplex receptacles mounted in plastic receptacle boxes attached to a piece of wood. Power to the receptacles was supplied by a short section of 14 American wire gauge (AWG) appliance cord connected to the first receptacle. The two receptacles were connected in a typical "daisy chain" fashion where the line conductors are connected in series to the load conductors.

The primary receptacle receives the line (ungrounded "hot" and grounded "neutral") conductors on its binding head (BH) screw terminals, and a second set of conductors was extended to the second (downstream) receptacle. One BH screw was intentionally left loose on the hot load conductor on the primary receptacle. The other screws were securely tightened. Plugged into the downstream receptacle was a Holmes1500 watt tower-type space heater and a Proctor-Silex 1200 watt toaster oven.

The combined current draw of the heater and toaster oven was approximately 15 amperes (A). Heating connections of lower wattage devices have also been noted at currents as low as about 1 A.[2] Note that nothing was plugged into the first receptacle. In the case of the investigation mentioned previously however, a string of Christmas lights were plugged into the receptacle in the area of origin. (Photographs 1 - 3)

The temperature at the connection was over 1000 degrees Fahrenheit (°F). The measured temperatures were taken with the side of the receptacle box open. To better simulate actual conditions, the side cover was taped in place and less than 5 minutes began to melt and deform. A small piece of paper was placed on top of the receptacle and in a short period the paper began to char. (Photograph 6)

To further replicate the actual as-installed condition, the receptacle cover was screwed in place and fiberglass insulation was placed around the receptacle box. The cover quickly began to deform from the heat of the connection.

In the actual investigation, clothing was discovered on the floor near the area of origin. Although it wasn't confirmed, it is probable that clothing was lying on top of the floor-mounted receptacle. To determine what effect the clothing would have on the heated receptacle, a piece of cotton cloth was placed on the face of the receptacle. (Photograph 7) 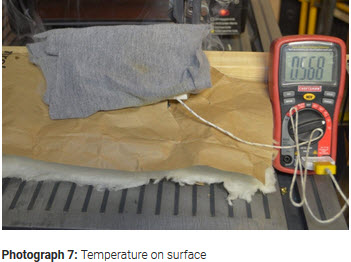 As anticipated, the temperature rose dramatically and the heated cloth quickly began to generate smoke. In approximately 6 minutes the temperature on the surface of the receptacle rose from 378 °F to 568 °F. This temperature is sufficient to ignite a variety of commonly found combustibles that may be in contact with the receptacle. The range of ignition temperatures for solids range from about 518 °F to 842 °F[3].

Another location for a poor connection in a receptacle is between a plug blade (either hot or neutral) and the female receptacle receiver slots. The blades would conduct the heat of the connection into the cord and compromise the insulation, creating additional means to serve as an ignition source. Barring a current leakage condition, an equal current level is anticipated on the hot and neutral conductors, thus a compromised connection on the neutral side is equally capable of generating the same peril. 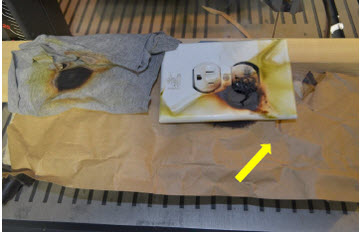 After just over an hour, the Ground Fault Circuit Interrupter (GFCI) receptacle used to supply the experiment tripped and the experiment ended. After the components had cooled, the BH screw and conductor were removed for further study. The screw exhibited discoloration and pitting. The copper conductor revealed an obvious loss of mass in one area consistent with electrical arcing. (Photographs 9-13) 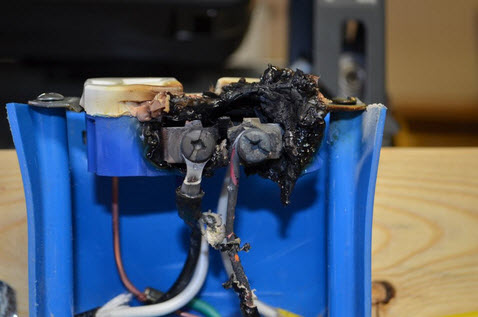 Photograph 9: Damage to receptacle after one hour. 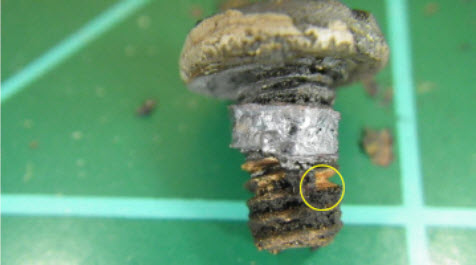 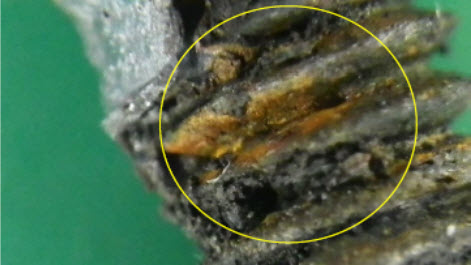 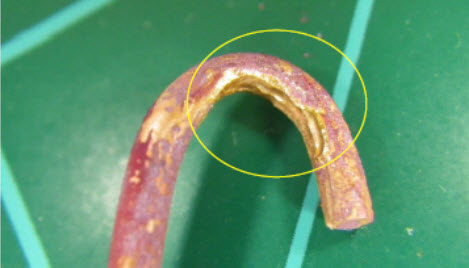 Photograph 12: Loss of mass on copper conductor. Arc site is inside circle. 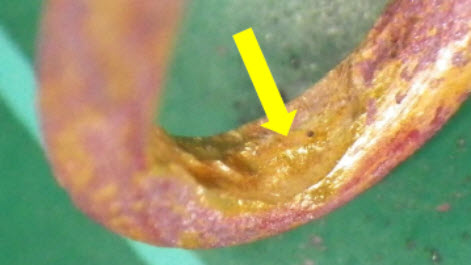 Seeing is believing. Several issues were confirmed in the experiment.

Note: No attempt was made to develop new chemical explanations or theories concerning the physical properties of a copper conductor when exposed to extreme temperatures as these have been done by others. This simple experiment was not intended to be a scientific laboratory study, but merely a confirmation of how an occurrence of a loose "glowing" connection can have serious consequence and cause significant damages.

Sam Landis IAAI-CFI, CFEI, has been a Donan certified fire investigator since 2012 and is based out of the firm's Charleston, West Virginia office. He has 20 years of firefighting experience, and has conducted over 400 fire investigations in his twelve years as a fire investigator. Read more about Donan's Fire Investigation Division here.

DONAN, a family owned company founded in 1947, provides full-service Forensic Engineering and Fire Investigation Services. For over 60 years, Donan Engineering has been providing unbiased answers to their client's complicated questions. Their team of licensed and experienced forensic experts provides investigative services in the fields of engineering investigations, fire and explosion origin & cause, roofing investigations, and component testing. The diversity of their multidisciplinary staff allows them to provide not only a complete service, but a complete service whose conclusions can be successfully and completely supported.

Financial planners begin their initial client meetings with a discussion of money goals, attitudes, and risk tolerance. Why? Well, it's because all investors are not created equally. Open individuals crave adrenaline-spiking adventures, always looking for thrilling activities. Most of the time, they are curious about information and knowledge about financial planning and investment decisions. These individuals enjoy researching and finding out about finance topics of interest.

A Crime of Passion, Sweetheart Scams Can Be Costly

My mom was one of thousands preyed upon by this nasty con. Here’s what to watch out for and how to protect those you love.