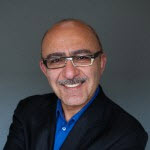 A µ-Synthesis Based Control for Compliant Maneuvers

As Originally Published By Transactions of the ASME, December 2006

Recently, with the progress of computers, robot manipulators have obtained some abilities of perception and judgment. However, it still remains a dream that robots have the same or more flexible intelligence than humans. In the mean time, the physical ability of a robot manipulator is superior in cases such as carrying heavy loads. To benefit from the physical advantage of robots and the intellectual advantage of humans, the human extender was studied [1].

The human power extenders are a class of robots, which are worn by a human and amplify the human's physical strength. While the human's intelligence remains as the central control system for manipulation. The human transfers his/her commands to the extender via the contact forces between the human and the extender. For the sake of better dexterity, the extender should also transfer to the human a scaled-down value of the actual external forces, and then the human "feels" them during manipulations. To achieve this, the force, which interacts between the environment and the extender, has to be sensed.

A force sensor is the typical answer, but extracting the external force may be possible only when the exact model of the system is obtained. Due to the existence of nonlinearities or unmodeled dynamics, the exact model may not be obtained. But it can still be beneficial to let the human operator feel the interactive force as long as the estimated force maintains some degree of accuracy. For this reason, we develop an algorithm, which estimates the external forces using input voltage to the actuators and output position from encoders. This force information feeds back to the operator at some scaled down ratio. In other words, the operator's force is amplified in accordance with this ratio. The ratio should maintain the same value as long as the task is the same. This is one of the goals for designing an extender control system.

Meanwhile, the control system is subjected to many uncertainties such as human dynamics and unknown environments. The extender must be stable against these various uncertainties. In fact, the performance goal of maintaining the force amplification ratio and stability against uncertainties contradicts each other. Therefore we must design the controller using a criterion, which optimizes this trade-off. µ-synthesis is one of the most powerful theories especially for systems, which involves independent uncertainties. To take advantage of it, the controller was designed based on this theory.

Section 2 describes the modeling of the extender system and states the problem, which concerns the stability and performance. It also discusses the modeling of the human arm. In Sec. 3 we discuss an algorithm to estimate an external force without a force sensor. It also discusses viscous friction at low frequencies and static friction that deteriorates the accuracy of the estimation. Section 4 presents the control1er design procedure and experimental results.

2 Modeling of the System

The whole dynamics of the human power extender is coupled with the dynamics of the human, environment, and the actuator, which are combined in Fig. 1. The system mainly involves two loop systems: the human dynamics loop and environmental loop. The upper half of Fig. 1 represents the human dynamics loop, which includes the force produced by the human arm impedance, Hm and intentional forces generated by human's nerve system. The latter force, µh, is a source for maneuvering the actuator. The force imposed on the actuator, ƒh is the difference between these two forces, which is measured for the controller.

The lower half loop represents the dynamics of the environment. It is produced as a result of interaction with the external environment such as contact forces or gravity forces due to the weight of a load. The force, ƒe, generated by the impedance of the dynamics, En is also imposed on the actuator. This force is to be estimated by the algorithm, which is described in a later section.

2.1 Performance. Maneuvering the human arm from one point to another point can be a position servo problem. However it is impossible to measure the exact position in 3D space where a human would like to move his arm in the next moment. The only thing we can do is to measure the force difference between the human's intentional force and the resistance force due 10 impedance of the human. At the moment when the human does not want to move his/her arm, zero signals come out. One possible design method of the controller is to place a double integrator whose initial state is a starting position, then input the integrated signal to the position servo controller. However. this should be avoided because the controller is to be implemented on a digital computer. Converting from continuous time integrator to discrete time will result in an integration error.

Another possible solution is to consider the system as a regulator problem. Now we define the performance of the system; to minimize the human's force measured by a sensor. The controller works to keep the measured force zero, which causes the actuator to move along with the human motion. This design scheme is more preferable and has better performance.

Without any interaction with an environment, the specification of the system design is to let the actuator move along with human motion without stress. This will be achieved by attenuating disturbances existing in the actuator such as friction. However, once the actuator comes into contact with the external environment, such a performance goal sometimes leads to an unexpected result. Pushing a pin into a hole is a well-known example. Under a constrained environment, the human needs to feel the interaction effect from the environment.

The force feedback ratio a in fig. 1 takes such a role in the system, which lets designers choose the appropriate performance for the actuator. The larger a is, the more the human feels the interaction; a signifies the human power amplification. In order to maintain the power amplification performance, the magnitudes of ƒh and aƒl in Fig. I needs to be sufficiently close to each other in the presence of disturbances that are bounded in magnitude and frequency. The goal is to decrease the undesirable effect of disturbances on the difference between ƒh and aƒt. This is framed mathematically by defining a sensitivity transfer function representing the difference between ƒh and aƒe. The goal is to minimize the norm of this sensitivity transfer function within a bounded frequency range.

2.2 System Design Based on µ-Synthesis. Exact dynamic models for the system are difficult to produce because of uncertainties in the human dynamics, environments, and the actuator. The human arm dynamics change with each human and also in one person over time. Moreover, unmodeled dynamics also involves nonlinearly. Uncertain environment may change even more drastically, because the extender has to always be stable both with and without contact. The stiffness of the environment may change from nothing to a very large value. Such perturbations cannot be negligible nor be dealt with as unmodeled disturbances.