“You Have The Right To Remain Silent…”: On Understanding The Miranda Warning (It’s Not So Easy)

1. You have the right to remain silent.
2. Anything you say can and will be used against you in a court of law. 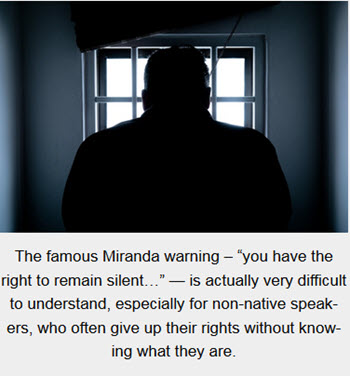 3. You have the right to talk to a lawyer and have him present with you while you are being questioned.
4. If you cannot afford to hire a lawyer, one will be appointed to represent you before any questioning, if you wish one.

(After the warning and in order to secure a waiver, the following questions should be asked and an affirmative reply secured to each question.)

1. Do you understand each of these rights I have explained to you?
2. Having these rights in mind, do you wish to talk to me now?

PART I: The problem

I just saw a promo for an upcoming rerun of Magnum P.I., and the only audio in the clip was the Miranda warning. It's a staple of TV crime dramas. If you're an American citizen and a native speaker of English, it sounds stark and threatening. When they read you your rights, you are already in deep trouble.

But surprisingly, a great many people don't see it that way. They may not even understand the rights they are giving up. Consider what must be an enormous number of native English speakers for whom the language difficulties of the warning; various readability tests indicate you need just above an eighth-grade education for at least 50% comprehension — see below. Now add in the millions living here, legal or not, who are non-native speakers (NNSs) of English.

America has absorbed, over the past few decades, vast numbers of people who speak and understand English with practically an infinite number of degrees of proficiency, typically influenced by their native language, but all of which fall short of a native speaker's command.

If you are a non-native speaker, the Miranda warning presents serious obstacles.

Why? The answer lies in several subtle aspects of the warning — its grammar, vocabulary, key concepts, sequencing of information, and the pragmatic aspects of repeatedly being asked if one "understands."

To begin with, and before we even get into grammar and vocabulary, understanding it requires a different set of linguistic abilities than are required by questioning. In the typical police interview, where you're merely answering questions, the interchanges are short, and you're constantly receiving verbal-and non-verbal cues from the interrogator.

This skill is very different from what’s required to comprehend and produce longer, interconnected texts — like the Miranda warning. The technical term is “CALP” (cognitive academic language proficiency), which is used in "context-reduced environments that require high-order thinking skills, such as analysis, synthesis, and evaluation" (Aneta Pavlenko, "'I'm very not about the law part': Nonnative speakers of English and the Miranda warnings," TESOL QUARTERLY, Vol. 41, No. 1, March 2008, p. 9).

CALP is required in order to understand the Miranda warning, which as it stands, is a barely-connected list that must be assimilated upon first hearing (note that the 50% comprehension was for a written text).
But this is just the beginning of the problems with the text.

Let's look at the text piece by piece, and you'll see what I mean.

1. You have the right to remain silent.

First, there's the meaning of (have the) right. This word encapsulates an entire legal system and political doctrine. But in many if not most of the countries of the world, citizens have no government-guaranteed rights as implicitly defined in the Miranda text. In such cases, defendants cannot be expected to understand the meaning and implications of you have the right...despite its importance to the whole proceeding.

The warning should limit the opening sentence with At any time or when I am asking you questions.... The revised wording fits the realities of the interaction. It assumes that the defendant would have been silent during a question (or at any other time when the officer is speaking), so now, if he so wishes, he can remain silent.

On this point, the eminent forensic linguist Roger Shuy notes that

"Most people know what silence is. This is perhaps the clearest of the Miranda admonitions. On the other hand, even if suspects know what remaining silent means, it is quite another thing to be able to do it. Most human beings are uncomfortable with silence while in the presence of others because it violates the co-operative principle. But just how silent must one be to be considered silent? Does 'silence' really mean that absolutely nothing will be said without forfeiture of the waiver? Does 'remaining silent' refer only to the substantive topic of the alleged crime? Can one engage in small talk, for example, and still meet the requirement of 'remaining silent'? If so, what actually distinguishes small talk from the kind of talk that will give the police the right to start questioning again?

"It has been my experience that many suspects who invoke their right to remain silent often continue to talk anyway" ("Ten unanswered questions about Miranda," Forensic Linguistics 4 (2) 1997, pp. 18 7-88).

2. Anything you say can and will be used against you in a court of law.

You say is relative-clause subordinated to anything, i.e., anything [that] you say. There's an extra layer of complexity.

At this point, if you're a NNS being interviewed and you've understood the first three words, you come upon a perplexing, illogical fork in the road: you have to hear the rest of the sentence as can be held against and/or will be held against you — in other words, match both can and will with anything and with everything that follows.

Comprehension is made even more difficult by the fact that will trumps all the other modals — can, may, might, even must. It is a direct, binding proclamation about the future. So if something "will" be used against me, why bother with "can"? Is it to confer some kind of legal approval on the "will" part?

Now consider used against you. This is a highly abstract idiom. If you're unfamiliar with the English language in general and the special language of legal proceedings, it would be difficult if not impossible to understand or anticipate how your words, recorded here and now, can be "used against" you.

I have been involved in cases where Defendants acknowledge understanding of this right — and go on to reveal exculpatory information. Clearly such individuals do not understand used against you and its implications for what he says to the officer.

Miranda is in effect asking Defendants to imagine themselves in circumstances that do not yet exist. The complexity of the sentence is increased (and understanding is further inhibited) by the macro-statements that this consequence — "used against you" — applies to "anything" the defendant says and that the consequences "can and will" occur.

3, You have the right to talk to a lawyer and have him present with you while you are being questioned.

This is out of sequence, thus hindering understanding of the whole text.

Ideally, ..while you are being questioned. should be the third item in the warning, after "you do not have to answer any of my questions" and "you can have a lawyer." The sequencing of items undermines comprehension.

Shuy reports the following from his many years of experience with such cases:

"[While suspects generally seem to know what 'an attorney' is, they often] seem to have been asking for an authority figure to help and advise them in their time of trouble...There are enough of these pleas for help from authority figures [such as a relative or a parole officer] to suggest that the suspects were simply not thinking of an attorney as their lone source of assistance."

"Even if the expression 'have an attorney' is understood...the suspect is still faced with the problem of knowing what is meant by 'present.' Does it mean right now? If so, how could that be, since it is only logical that this would take considerable time to arrange?...[Does the suspect think that being 'present' means] [d]uring this very interrogation that seems to have already begun and to which an attorney could only be, at best, a very late arrival, perhaps too late in fact?" (Ibid. p. 183)

4. If you cannot afford to hire a lawyer, one will be appointed to represent you before any questioning, if you wish one.

Problems include unfamiliar words — afford, appointed, represent, questioning (a term of art that does not reveal the nature of the interrogation to come) — and the double conditional, which splits the two preconditions and makes the sentence more difficult to understand.

Eugene Briere ("Limited Language Speakers and the Miranda Rights," TESOL QUARTERLY, Sept. 1978) notes that "the grade level scores resulting from applying [various readability] formlae mean that a person reading the {Miranda] material would have to have completed" just over an eighth-grade education to understand 50% [emphasis mine]."

If a native speaker who's already started ninth grade could achieve only 50% comprehension, what can reasonably be expected of a NNS?

(After the warning and in order to secure a waiver, the following questions should be asked and an affirmative reply secured to each question.)

Sometimes the officer will ask, after each right, whether the interviewee understands. This does not assure that person actually comprehended the entirety of what was said — see above comments on interactive vs. analytic language competence.

1. Do you understand each of these rights I have explained to you?
2. Having these rights in mind, do you wish to talk to me now?

I've already discussed how NNSs may have no understanding of "rights" as we know them and as embodied in the Miranda warning.

As for the repeated questions as to whether someone "understands," a false "yes" answer could be given because the interviewee does not want to appear stupid or uncooperative. These are powerful motivations that may be partly responsible for the fact that all too often NNSs say they understand a word or phrase when they merely recognize it. As Shuy notes (Ibid., p. 182),

Dr. Alan Perlman, is a forensic expert who offers clients exceptional quality, experience, and expertise. He is an academically trained linguist, one of a small number of linguistics experts who assist the legal professions.

Basic Forensic Linguistic Skills: How Text Sensitive Are You?

A forensic linguist must be exquisitely sensitive to nuances of text. Where a synonym exists, the very choice of each word represents a decision on the part of the author. Superimposed upon that is the way the word is spelled, abbreviated or capitalized. Truly, a text is a tangle of choices.

As a student, scholar, and professional writer, I have long been familiar with the standards governing academic honesty and plagiarism. I applied these to many academic publications, including my master's and doctoral theses. I dealt with student plagiarism at various times in my professorial career (1967-1980), and later, as a speechwriter and corporate communicator, I applied these standards to ensure that the content of my work products, including professional articles, was either original or properly attributed.

On The Devolution Of Political Slogans: Mike Will Get WHAT Done?

What kind of a political campaign would it be if we didn’t have slogans? The political slogan is like a brand name, a brief thought that somehow summarizes the campaign and a candidacy.