Connected Cars: How C-V2X In 5G Will Transform Cars And Save Lives (Analyst Angle)

Technological improvements in cars over the decades have generally reduced costs or increased performance and safety. “Analog” technologies including collapsible steering columns, crumple zones and seatbelts have saved car occupants from death or serious injury. Many digital technologies have also improved our in-car experience with entertainment, mobile communications and navigation; but in some cases, safety has reduced as drivers are distracted by operating these features.

We are on the brink of an automotive revolution in which 5G technologies will dramatically increase safety as well as well as utility and performance. The key enabler for this is C-V2X, which is being implemented in conjunction with various sensor technologies and AI software. This will completely transform the connected car. It will make existing capabilities better and enable many new ones.

Major changes in cars over the next decade or so include autonomous driving, shared mobility and electrification (i.e. elimination of the internal combustion engine). In this article, I focus on autonomous driving including some of the key technologies that will improve safety by assisting drivers or eliminating them with full automation in self-driving cars. 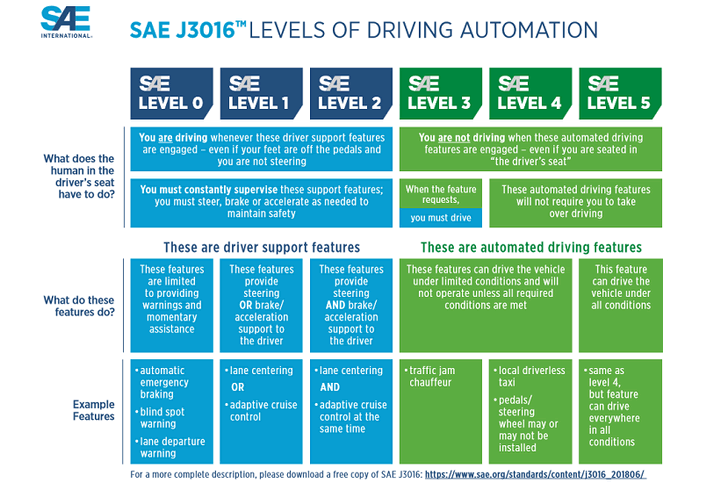 While alerts such as lane departure warnings and lower levels of driving automation including automatic emergency-breaking are already commonplace and helpful in specific ways, drivers remain entirely responsible for their vehicles and for avoiding collisions.

Driver error is by far the major cause of deaths and serious accidents on the road. Mechanical failure of properly maintained vehicles (that can also be mitigated by automation), and other hazards such as falling trees, account for only a very small proportion of fatalities. On occasion, drivers suffer from poor judgement—particularly when they are tired, distracted or drunk. Driver error tends to be significantly higher than average among teenagers and seniors.

According to the World Health Organization, road traffic injuries cause around 1.25 million deaths per year worldwide. According to the US Department of Transportation, 37,461 people died in traffic accidents in the US in 2016.

Of the latter, more than 200 people are killed and over 12,000 more are injured each year in the US due to “backover” crashes, according to the DoT. Of those killed, more than half are children under 5 years old or adults 70 and older. Rearview cameras have already been found to reduce backup-related crashes by 17 percent, according to the Insurance Institute for Highway Safety.

DoT researchers estimate that fully autonomous vehicles, also known as self-driving cars, could reduce traffic fatalities by up to 94 percent by eliminating accidents that are due to human error. I find it difficult to believe anywhere near such a high reduction could be achieved within less than several decades—even in developed nations such as the US, let alone worldwide—but if only a quarter of fatalities, along with a corresponding proportion of serious and other accidents, could be eliminated, this would be enormously valuable in human and economic terms.

While the value of life may be considered priceless, economists sometimes find it useful and necessary to put a figure on it. For example, one international standard used for medical insurance and treatment purposes values one year of “quality life” at $50,000. If eliminating a quarter of traffic fatalities extended quality life by an average of twenty years, the value would be $9.4 billion per year in the US alone.

The value of autonomous vehicles including self-driving cars is also in the time it saves. If drivers do not need to drive or supervise semi-automation they can work, sleep or relax, for example, while watching video instead. Depending on various assumptions, the value of this would also clearly also be many billions of dollars per year in the US alone with 284 million vehicles registered there in 2019, even if only a moderate proportion of cars were self-driving. Elimination of drivers from taxis and Ubers would save enormous staffing costs.

Connectivity With 5G Is The Key

While sensors including cameras and light detection and ranging LIDARs can help a vehicle read the road, all such technologies have difficulties in some instances. For example, road markings disappear in snow and objects including obstructions may be misinterpreted. Accidents are inherently rare occurrences, so full automation requires extremely high accuracy and reliability in recognition and tracking of objects if accidents are to be avoided or significantly reduced. Communications among cars, with nearby infrastructure (e.g. lamp poles) and with the network will complement sensor technologies and enable much-improved accuracy and reliability to be achieved in conjunction with AI software.

WiFi-based Dedicated Short-Range Communications (DSRC) established the foundation for vehicle-to-vehicle communications. DSRC uses the Intelligent Transportation Systems (ITS) 5.9 GHz band (5.85–5.925 GHz) which was reserved for DSRC V2X communications by the US government in 1999. This is a different kind of spectrum categorization than for the licensed spectrum blocks used by cellular or for unlicensed frequencies used by WiFi and for cellular with LTE-LAA.

DSRC development and adoption has been slow and lackluster: it is largely being superseded by 3GPP’s cellular-based technologies that can also access the ITS band, as well as the frequencies used by mobile operators for other 4G and 5G services. In 3GPP Release 14 with LTE, C-V2X defines two transmission modes that, together, enable a broad range of use cases. Direct communication C-V2X “sidelink” includes vehicle-to-vehicle (V2V), vehicle-to-infrastructure (V2I) and vehicle-to-pedestrian (V2P) providing enhanced communication range and reliability. The ITS spectrum used for this is, therefore, independent of cellular networks using traditional licensed spectrum for the second transmission mode of vehicle-to-network (V2N) communications that provides mobile broadband and voice calling.

C-V2X in 5G will take accuracy and reliability to a much higher level. Direct connections among neighboring vehicles and infrastructure will enable positioning accuracy to 2 cm. As identified by the GSMA, C-V2X can be used in many different ways to improve road safety, while making more efficient use of transport networks and infrastructure. For example, it can support:

The 5G Automotive Association was created to connect telecom industry participants and vehicle manufacturers to develop end-to-end solutions that can exploit these opportunities technically and commercially.

While the addition of many new digital technologies in cars as been a mixed blessing in terms of safety, use of C-V2X will be a leading factor in improving car safety and in reducing fatalities on the road. Even “hands free” calling can be distracting as drivers fumble through address books. In-car navigation and entertainment systems, along with dashboard-based text messaging touch-screens, are useful to drivers, but can also significantly distract them from driving. In contrast, ADAS systems will improve safety, particularly with the introduction of C-V2X technologies that will increase object recognition and tracking accuracy and reliability to the required levels required for much safer driving and for fully autonomous self-driving cars in the years ahead.

Buses and Motorcoaches: Directing the Students Across

At the rudimentary level at which most crossing procedures are executed, schoolbus drivers are supposed to "direct" the students across the roadway when they are certain that either the traffic has been stopped in both directions or it is so distant (if even visible) that the students could easily complete their crossing before any oncoming vehicles reach the bus. The bus would obviously have its red flashers and stop arm engaged as a "fail safe."

Event Data Recorders (EDRs) are electronic devices, commonly called Black Boxes, that are installed in motor vehicles. EDRs have the ability to record information about what a vehicle did before, during and immediately after a traffic crash

This new National Bus Trader piece is the first installment of likely a year-long series about types of incidents that result from trade-offs of safety for other benefits -- adherence to unrealistically-tight schedules (or drivers running behind schedule) being the principal culprit. Frankly, of the more than 600 public transportation-related lawsuits in which I have served as an expert witness, roughly half of all incidents see to be the result of some deliberate safety compromise.