Last June, 18-year-old Kelsey Smith was forcibly abducted from the public parking lot of an Overland Park, Kansas, Target store. Her body was found four days later in a Missouri park about 20 miles away. In August, in Macon, Georgia, John Fox was returning to his car in a downtown public parking deck when he was accosted by a robber who used his gun to hit Fox several times on the head, then stole Fox's wallet and keys. And on September 5, the EastBay Express news Web site published an article called "Lots of Trouble," that reviewed the explosion of crime the previous summer in the parking lots of San Francisco's Bay Area Transit System, reporting that "In the Bay Fair station's parking lot June 9, three teens beat a man about the face and fled with his phone and laptop... At the Coliseum station [on June 17], six men attacked another, hurling him to the ground and demanding his money."

These are just a few examples of the plethora of crimes that take place in parking facilities. In fact, it has been estimated by an ongoing series of studies on premises security liability by Norman D. Bates, president of Liability Consultants, Inc., that as much as 40 percent of rapes and assaults take place in parking lots.

During my career, I have noted that major errors in the design and operation of parking facilities arise from the mindset that these are merely stables for vehicles and not places where human behavior occurs. Among the resulting problems from this shortsighted design approach can be an environment with numerous hiding spaces as well as poor visibility created by high walls, structural columns, and multiple levels. Even worse, subsurface or underground parking facilities often include no outside visibility.

Another typical problem is poor entrance and exit planning, with signage that does not help users move quickly or logically through the facility. Often, pedestrian access points fail to provide natural surveillance from the sidewalk through the garage door, and perimeter access by persons walking or driving is usually unsupervised.

Parking facilities also fall into the trap of applying the same access protocol across the board without factoring in staffing patterns, late evening checkouts, or other site-specific use considerations. Often, electronic security measures for surveillance and access control are inadequate or absent.

Finally, the facility is usually dirty and poorly maintained. Vandalism, graffiti, and general disrepair sends a clear signal to potential criminals and other undesired users that the site is fair game. At the same time, it makes legitimate users feel afraid. If legitimate users stay away out of fear, then no sense of territoriality will develop, and those users won't feel any involvement in keeping undesired users away.

Parking areas can avoid these problems if they use the precepts of crime prevention through environmental design (CPTED). By following CPTED principles, security can lead criminals to see parking areas as places where they will be observed and where suspicious behavior will be challenged.

CPTED incorporates five principles. The first is the use of natural surveillance. Sites are designed so that users can see farther and wider, making it harder for criminals to hide or carry out their activities. The second principle is the creation of natural access control, including spatial definition that encourages legitimate site users and discourages illegitimate ones. The third principle is the encouragement of territorial behaviors by legitimate users. The fourth principle is management and maintenance of the facilities to meet industry standards of care. The fifth principle of CPTED is legitimate activity support, and encouraging and attracting legitimate and legal users and uses.

The first step toward parking lot security through CPTED is to conduct a security vulnerability assessment. Generally, in the United States, the standard of care dictates that the assessment include a criminal history of the site, a review of landscaping, lighting, stairwells, elevators, surveillance capabilities, access control equipment, and signage, as well as an inspection of revenue collection, supervision, and restroom facilities. The policies and procedures for the operation and staffing of the parking facility should also be scrutinized.

Many ":who, why, what, when, where, and how" questions should be asked, including: What type of community does this parking facility serve-shoppers, commuters, students, or employees? How many cars frequent the facility and how quickly do spaces turn over? Are there clear lines of sight? Are there obstructions by walls, columns, or ramps? What are the hours of operation and how do those hours affect the user environment? Is the lighting all or mostly natural or is it manmade? Is man-made lighting at ceiling height? If so, what is the color of the ceilings and how are the lights placed? Is there a CCTV system, and if so, what are the details of the system? Are there ground floor protection measures, such as gates, screens, and barriers?

Randall Atlas, Ph.D., AIA, CPP' is a registered architect, NCARB certified, and he practices criminal justice architecture and environmental security design. Atlas is a certified protection professional (CPP) with the American Society of Industrial Security (ASIS), and is an appointed member of the ASIS Security Architecture and Engineering Committee.

Fast Food, Easy Money:Find Out How Sites Hit By Smash and Grab Burglaries Could Have Reduced Their Vulnerability

BETWEEN LATE 2009 AND MARCH OF THIS YEAR, a national baked goods chain with franchises in Broward County, Florida, experienced a series of nighttime burglaries that resulted in thousands of dollars in stolen cash and damaged property.

When it comes to the issue of safety in schools, it is important to remember that long before the students walk the halls, a design team creates the building and its grounds, envisioning the subsequent relationships with its occupants. 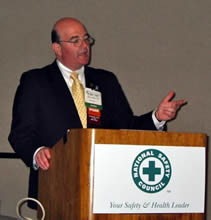 How Vulnerable Is Your Facility?

We often times think of our own facilities, our sites as something no one would want to harm... or would they?