No one likes to see children get hurt, especially when it could be prevented. Poor design, manufacturing defects, material defects, assembly errors, and the lack of a hazard analysis can result in hazardous products that injure people. Many products are put in stores that may have never been looked at by a design engineer and/or a safety specialist.

There is a multitude of children's products and products that may be interacted with by children that can cause injury. Manufacturers like to defer to 'user error' whenever possible, putting blame for injury on the product user. Safety design theory and practice has established that it is the responsibility of the designer and manufacturer to accommodate human behavior. This is especially important when dealing with children - children do not have the body of knowledge and experience that can prevent adults from exposing themselves to hazards. Every possible human action that could lead to a product injury must be considered and dealt with.

Over 20,000 emergency-room visits occur each year due to children being injured in shopping carts. Shopping cart injuries can be broken down into main several categories: child falling from cart, cart tipping sideways, and cart tipping rearward. These account for the majority of shopping cart accidents. 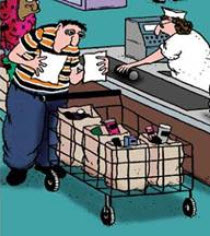 Shopping carts with a high center of gravity can tip sideways, potentially resulting in severe injury to any children riding in the cart. The design of the cart establishes the center of gravity, with crucial elements being the position of the basket, and the height at which the main cart area begins. Carts that have elevated main storage areas will have higher centers of gravity. The wheelbase of the carts will also affect the carts tendency to tip sideways. Siblings pushing or jumping on a shopping cart can initiate a side tip over. Carts must be designed to be stable as empty carts, or carts with any amount of groceries.

Rearward shopping cart tip overs commonly occur with a child sitting in the small basket. This added weight can make improperly designed shopping carts more likely to tip rearward. Some carts require very little force on the rear handle to cause a flip, some being able to flip from the weight of a child alone. Carts are more likely to tip rearward with an empty cart than a cart loaded with groceries. The single most crucial element of shopping cart design is the location of the handle in relation to the rear wheels of the cart. Cart manufacturers presumably located the handle at positions rear of the rear wheels to give the user more steering ability.

The best solution to rear tip over accidents is to minimize the distance from the rear wheels to the handle. Manufacturers who are constructing carts with handles that are distant from the rear axle are making dangerous products

Forces on the rear handle can tip carts

The design priority method of hazard safeguarding involves eliminating a hazard at the design stage as the best, most effective method of safeguarding. For shopping carts, this is simple - remove the child from the hazard. From a manufacturing level, this would involve making a shopping cart that does not have leg holes for a child. This simple modification would discourage carrying children. A better solution would be to eliminate the small basket altogether. Some manufacturers have chosen a more proactive approach and make shopping carts with attached childrens' seats. These seats are usually at a low elevation, reducing the falling and tipping hazard.

At a individual level, there are numerous ways to remove the child from the hazard, including leaving a child at home, having a friend or parent carry the child, having older children walk instead of being carried, etc. Removing hazards at the design level also includes making a shopping cart as stable as possible, by making the center of gravity as low as possible. A low center of gravity reduces the chance of tipping. Siblings climbing or riding on the sides of the cart could be eliminated by covering the foot rest area with mesh covering on the sides and fronts. This removes the place where children put their feet, which would prevent most kids from attempting to ride on the exterior of the cart.

Little has been done to regulate the design and manufacture of shopping carts. Currently there are no adequate performance standards for shopping carts. The CPSC has even denied proposals for regulatory shopping cart standards. This is unfortunate, because a few simple design requirements could drastically reduce the number of accidents that shopping carts cause each year. Our regulatory agencies' lack of action and concern is having an impact on us, resulting in needless injuries, deaths, and brain damage.

Highchairs are a standard item in most homes with young children. Unfortunately, thousands of children each year are treated for injuries caused by highchair accidents.

Deaths occur when unsupervised children slip down in their seats, getting caught between the tray and the seatback, which results in strangulation. Typical accidents include falling from the highchair, tipping of the highchair, and injuries caused by the folding action of highchairs. 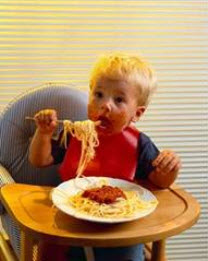 Tipping of a highchair can be caused by a child pushing off of a wall or nearby object, as well as by instability caused by an unrestrained child who is standing on the chair or tray. Highchairs that are not designed for stability may result in a highchair that has too narrow of a base, or the highchair may be too top-heavy. The ASTM standards have stability and load test criteria for highchairs. While compliance is officially voluntary, highchair manufacturers who fail to meet state of the art technology may be found to be producing unreasonably dangerous products.

Safety Engineering Resources' determines if a product meets current state-of-the-art technology. We use physical testing in our shop to test products to various industry standards. At times standards will not be adequate, meaning that they do not effectively establish the safety or lack thereof of a design. In these situations, Safety Engineering Resources will develop our own testing criteria, and test the subject product, as well as compare its performance to competitor products.

Many highchairs are collapsible for easy storage when not in use. This convenient feature can lead to another hazard - pinch point injuries, as well as potential stability issues. Most highchairs have locks that lock the highchair in place, preventing the highchair from collapsing. We have seen highchairs with a locking mechanism that was completely defective. We tested a highchair's unfolding/locking mechanism, and found that the mechanism failed after less than 20 openings and closings. The mechanism relied on a thin piece of plastic to hold the highchair in the upright position, which was overloaded when the chair was erected and stored. When the plastic broke, there was nothing to prevent the chair from collapsing. Proper design is the first step in preventing this type of accident - locking mechanisms must be designed to be safe for an indefinite lifetime. From an engineering design standpoint, the structural stability of the highchair should not rely on a low-strength locking mechanism. Material defects and manufacturing processes must also be controlled to prevent problems which could result in injured children.

Strangulation occurs when children's necks are caught between the tray table and the back of the seat. Unrestrained children can slide downward in their seats and become stuck between these two surfaces. This type of accident is prevented by the use of the restraint harnesses and crotch posts.

In the November, 2012 issue of this newsletter, I wrote that the FDA was investigating reports of deaths due to the intake of energy drinks and was determining if energy drinks were safe. Earlier this month, the FDA issued a harsh warning against energy drinks and supplements containing the stimulant dimethylamylamine (DMAA), telling consumers to stay away from it while adding that the agency was "using all available tools at its disposal" to ensure that it is no longer sold. This is a formidable task because we as a nation spend more than $12.5 billion a year on energy drinks, shots and drink mixes. Although seven other countries, including Canada, had previously banned supplements containing DMAA, these products had remained widely available at supplement stores in the United States, including GNC.

A Viable Product vs. The Legal System

In the United States, the most litigious country in the world, a products liability action may be brought, under state law, for express or implied breach of warranty, misrepresentation and negligence. Under the theory of strict liability, a lawsuit may be initiated on the grounds of manufacturing and design defects as well as poor and inadequate warning instructions. The best defensive strategy for a company to avoid becoming involved in any of the above is to manufacture the safest product possible within parameters of economic feasibility. If said manufacturer can vouch for safety factors in the design, production, testing, inspection and evaluation of its product as well as attentiveness to consumer complaints, it will be more likely to avoid litigation or at least be able to prevail in the courtroom.