In the construction industry, it is largely agreed that overtime work adversely affects labor productivity. However, there is no universally accepted method for estimating the resulting loss of productivity, and many of the studies commonly used to estimate such losses have been subject to criticism by industry experts and the courts.

This article describes a detailed method for estimating productivity losses retrospectively, i.e., after the hours have been incurred. The proposed method uses the productivity losses from an MCAA Bulletin published in 2011, in which the MCAA averaged the results from four well-known overtime studies. Using this method, one applies the MCAA's productivity factors to the actual hours on a week-by-week, worker-by-worker basis to estimate inefficient hours. Among its several advantages, the method a relatively time and cost-effective way of providing detailed results, as it can be used to show the inefficient hours for a given worker or crew, or the inefficient hours in a given week or timeframe.

The Sections below include a brief introduction to the MCAA Bulletin, a description of the proposed method including the steps involved with setting up the Excel model, and the advantages and potential disadvantages of employing this method.

In 2011, the Mechanical Contractors Association of America, Inc. (MCAA) published Bulletin No. OT1 Revised, titled "How to Estimate the Impacts of Overtime on Labor Productivity." In its Bulletin, the MCAA did not provide a study based upon new overtime productivity loss data, but rather it analyzed and summarized the data from four existing studies:1

Regarding these four studies, the MCAA wrote:

"These studies have been in use in the construction industry for many years and have been generally accepted as reliable measures of lost productivity due to unplanned extended overtime. Each has its strengths and weakness, including criticisms ranging from the use of limited data sources to the withdrawal of reports from publication. However, the baseline data in any of these studies have never been proven to be inaccurate. Moreover, the concept that a contractor's work force becomes less efficient as unplanned extended overtime is worked is generally recognized and has never been disproved as an underlying fact." 2

The MCAA also cited four cases in which U.S. Courts and Boards acknowledged and/or allowed the studies to be used as a basis for quantifying productivity losses due to overtime.3

3. DESCRIPTION OF THE METHOD

Productivity Indices from the MCAA's Bulletin No. OT1 Revised 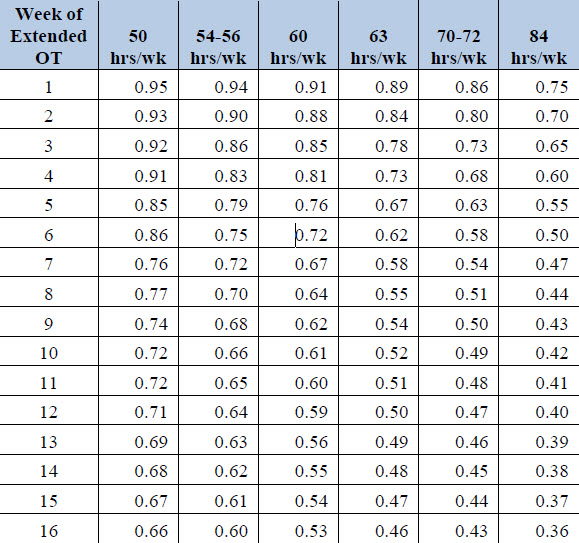 The method described in this Section applies the PIs (and resulting productivity losses) from the MCAA's table, Table 1 above, to the actual hours expended by each worker in each week of a project. Thus, it is a retrospective analysis in which one can quantify not only the total loss of productive time, but also the lost hours for a given person, in a specific week, or over a given timeframe.

The leader of a corporation or project is the individual who must ultimately be willing to take responsibility for results. Within the context of an organization or team made up of individuals, it is the collective performance of the individuals, as a team, that defines the results of the whole. While it can be said that the best motivation is internal motivation as opposed to external motivation, the leader is ultimately the one responsible for creating the conditions where motivation can thrive.

Most of the misunderstandings pertaining to contractor and homeowner relationships occur as a result of unclear or wrongly interpreted construction contracts. Upon entering into a building contract, the enthusiasm for starting the proposed work often creates a kind of glazing over or dulling of the senses on the part of the homeowner. Many times questionable terms and arrangements for payment scheduling are accepted or unknowingly agreed to as the homeowner's urgent desire to start work overshadows common sense. Often, the lowest priced contractor seduces the homeowner with promises of more value for the money.

The traditional methodology for addressing safety for facilities, machines or products is for owners, architects, engineers, consultants, contractors and vendors to complete the design, engineering, construction or fabrication of a project based on past knowledge, experience and training.