Major innovations in cellular technologies arise largely from the substantial Research and Development (R&D) investments and inventions of relatively few companies, followed by widespread collaborations including many more in the process of standard setting. 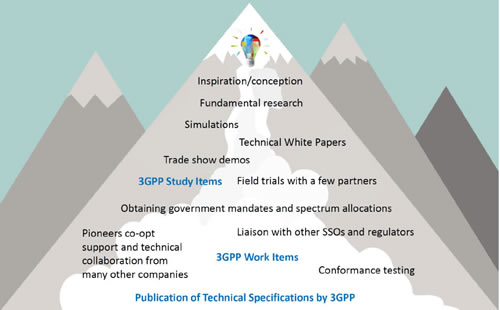 The disproportionately large amounts of value created by those with most of the inspiration and perspiration in technology development are not reflected in simplistic and often-inflated metrics that are increasingly being used in patent-licensing rate apportionments, including by the courts in Fair, Reasonable and Non-Discriminatory (FRAND) licensing disputes. These metrics include the numbers of contributions to the standards and the numbers of patents declared-essential or cursorily judged to be essential to the standards. Thousands of negotiated and executed licensing agreements, including cross-licenses, with various terms in addition to royalty rates-all underpinned by billions of dollars paid annually over many years-much better reflect how patent-protected value is generated and exchanged.

Device manufacturers, network operators, over-the-top (OTT) service providers and end users derive enormous value from extensive and easily-available technologies in published standards from Standard-Setting Organizations (SSOs). That is evident from the huge success of cellular including an extensive market entry in supply and widespread adoption. With significant and increasing division of labor between the few who invent and develop Standard-Essential Patent (SEP) technologies and the many who implement these in manufactures, the formers are increasingly dependent on licensing income-based on their shares of value created and exchanged rather than on simplistic metrics such as numbers of contributions to SSOs or SEP counts-to make adequate financial returns and justify reinvestment in further technology R&D

New cellular and other standardized-technology innovations proceed in three overlapping and entwined stages:

Creating, developing and then incorporating innovative cellular communications technologies in standards is a massive endeavor that expands significantly as it proceeds. It involves increasing numbers of companies as it progresses from conception through to the adoption of new technologies in Technical Specifications at 3GPP and in the standards with its seven regional partners, most significantly including the European Telecommunications Standards Institute (ETSI). Any assessment of how much value is contributed and by whom to standard-essential technologies, including 3G WCDMA or HSDPA, 4G LTE and 5G cellular, must consider the entire process including Stages 1 and 2, not only what is most visible and measurable in standard-setting activities, such as contributions or meeting attendance, at Stage 3.

The large R&D investments and resulting value generated in the first and second stages of innovation, identified above, are not always apparent because the work there is largely hidden from the public or might only be recognized by specialists. In contrast, the popular but simplistic use of publicly-available SSO activity metrics in Stage 3, such as counting the numbers of technical contributions to 3GPP Working Groups (WGs) as a proxy for a company's share of innovation in standards, can significantly understate the value provided by inventors and pioneers while inflating that of companies who join the bandwagon of an emerging success later on - for example, in the Study Item (SI) and Work Item (WI) phases of standard setting at 3GPP.

Most of the activities logged in the public records of 3GPP are the mere tip of the iceberg in terms of the total amount of development work undertaken, including that outside this SSO, with even more extensive other activities submerged from public view. Activities including in WGs and other meetings at 3GPP are publicly visible because "TDoc" technical contribution documents, meeting attendance records and other information are all available publicly online. But this represents only a small proportion of total effort and rather less still of technical effort or innovation, which most significantly also includes company R&D outside this SSO.

SSO Work at 3GPP is the Tip of the Iceberg 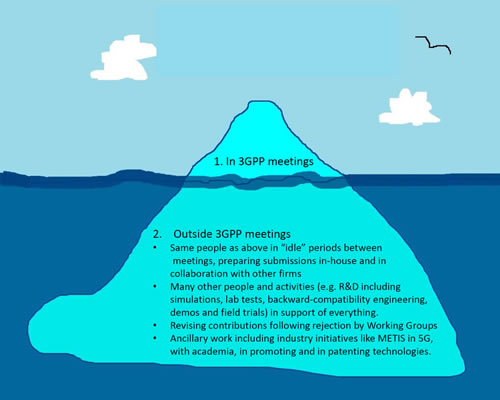 Whereas standard setting is nominally a matter of selecting the best from among various contributions, in practice the process is far more subtle, complex and multifaceted. For example, most technical contributions that are ultimately approved, are subject to multiple revisions and resubmissions before standardization is completed. Building the required consensus for technology selection among SSO participants also significantly involves consideration of non-technical issues, such as companies' business models and reputations, bilateral business agreements and nationality. Even the approval of purely technical contributions can significantly reflect these other factors in many cases. This distorts the accuracy of contribution counts as a purported indicator of patentable inventive and innovative technology developed and incorporated in the standards by one company versus another.

Neither patent counting nor contribution counting can account for significant differences among patents, and among licensors and licensees. Most declared-essential patents are not actually essential. Even adjusting counts of these with third-party standard-essentiality assessments is problematic because it introduces additional inaccuracies including bias. SEPs are not all of equal value. The same proviso applies to judged-essential patents and to SSO contributions. Bargaining strength is not proportional to any of these counts and depends on other significant factors including R&D pipeline and technology roadmap, position or absence thereof in downstream product markets.

Many patent-licenses established bilaterally with numerous licensees and underpinned by billions of dollars in payments over many years reflect all these complexities and subtleties. Formulae used to diagnose existing licenses and apportion royalty rates elsewhere simplistically misrepresent these dynamics.

Presiding Judge Selna expressed "some reservations" about top-down royalty-rate apportionment methodology based on patent-counting proportionality in this litigation (see Decision, page 50); but he used it there, regardless, as his primary means of determining FRAND rates in his declaratory judgement.

In a cellular marketplace worth trillions of dollars, with value and growth driven by recent technologies such as LTE Advanced, LTE-LAA and upcoming 5G, is it important to identify where and how much value is generated and exchanged in SEP technologies. Innovators' rewards should be commensurate with that-as exemplified in numerous executed licenses- not based on simplistic counts of contributions to SSOs or patents

The example of taking cellular technology into unlicensed spectrum with LTE-LAA is a pertinent case study in how and where value is created in standard development because this major innovation significantly involved various regulatory and commercial issues as well as matters concerning the incorporation of already-standardized and new technologies. This case study and these related issues are discussed in my full article. It can be downloaded, here.

The automotive industry is being revolutionized by continuous cloud connectivity, autonomous driving technologies, drive train electrification and shared mobility. These transformations are being facilitated in part by the standardized cellular technologies now commonly implemented in “connected vehicles” or “CVs”.