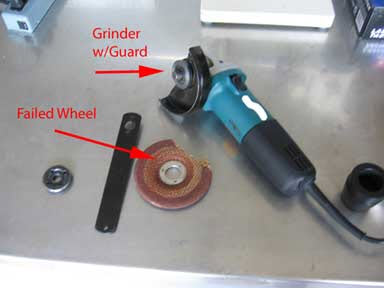 Figure #1 is a photograph of the subject failed grinding wheel and the subject grinder. The grinder is assembled with the guard. 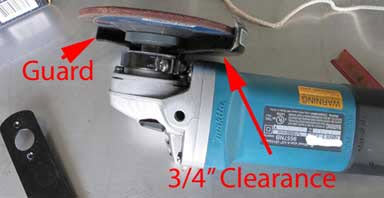 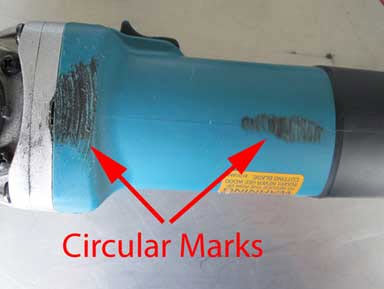 Figure #4 is a photograph of the subject "failed" grinding wheel. The grinding wheel is a fiber reinforced resin bonded wheel. Looking at the paper along the edge of the failure, one can see that it is folded over. This would not have occurred if the wheel had "flown apart" as claimed. In addition, there is a linear set of tool marks more or less opposite the failure. These marks indicate that this wheel had been held in a clamp. Thus, its condition had been altered after it had been sold. Figures 5 & 6 show these marks in more detail, From this evidence, one must conclude that the subject wheel had been clamped in a device such as a vice and that the missing piece had been purposely broken off by forcefully bending the clamped wheel. 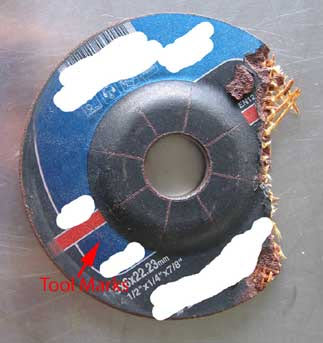 Figure #4 is a photograph of the subject "failed" wheel. Along the fracture the paper label is folded over. In addition, there is a set of linear tool marks that are indicated by the arrow. 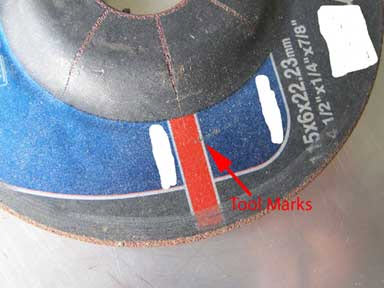 Figure #5 is a close up photograph of the subject "failed" wheel. The set of linear tool marks are more visible. These marks indicate that this wheel was held in a clamp (probably a vice). 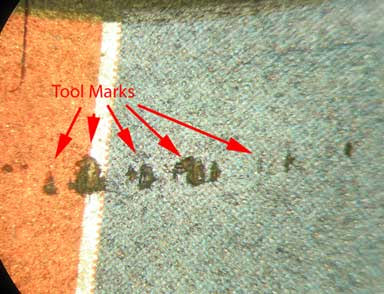 Figure #6: Low power photomicrograph of the tool marks. They are in a linear array and are seen because the paper label has been penetrated by a clamp. Damage to the paper label made it possible to see that the wheel had been clamped and was not in the "as sold" condition (Mag. 15X).

During normal operation, the arm on an automatic wafer test station failed. Root cause failure analysis determined that the drive shaft on the right angle gear motor used to raise and lower the manipulator arm had failed first.