Analyst Angle: How to Provide Gigabit LTE Cheaply When You Don't Have the Spectrum?

Consumers are only beginning to use LTE in unlicensed spectrum. So far chatter has mostly been about operator trials, commercial chipsets and sales of devices to seed the market before anyone is to be able to use the new service feature. Nevertheless, the commercial impact will be quite dramatic within a few years. 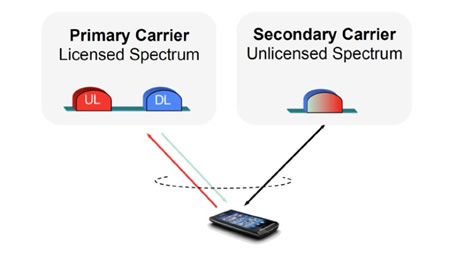 Licensed Assisted Access (LAA) was introduced in 3GPP release 13, March 2016, as part of LTE Advanced Pro. LAA uses carrier aggregation in the downlink to combine LTE in unlicensed spectrum (i.e., at 5 GHz for now) with LTE in licensed bands. The additional capacity provides faster data rates and a more responsive user experience. For example, a mobile operator using LAA can support Gigabit LTE with as little as 20 MHz of licensed spectrum. A seamless and reliable connection is maintained with a persistent anchor in the licensed spectrum that carries all the control and signaling data.

Deutsche Telekom claimed to be the world's first operator trialing LAA over-the-air. It did this in in Germany, November 2015, prior to LAA specifications being finalized several months later.

In case you were distracted with festivities in the run-up to Christmas, the leading U.S. carriers have been quite vocal recently about bringing LTE into unlicensed spectrum with LAA. In mid-November 2017, AT&T boasted it was the first to launch LAA commercially, to customers in Indianapolis. In early December, T-Mobile reminded us it was still trialing LAA and had achieved 1.1 Gbps with the technology. Already in June 2017, T-Mobile had launched commercial LTE-U, a precursor to LAA without interference avoidance based on Listen Before Talk technology, in six U.S. cities. And, just before Christmas, Verizon indicated it was starting to deploy LAA with radios at select cell sites around the nation. Verizon's VP of network support, Mike Haberman said, "you're going to see these pop up all across the country."

Even where and when LAA is initially switched on commercially, it will take a year or so for enough of the devices out there to "refresh" with LAA to have a significant impact. Nevertheless, it is not only those who have LAA-capable new devices like the Samsung Galaxy S8, including the company's own Exynos 8895 or Qualcomm's Snapdragon 835 chip, who will benefit. As is always the case with a new, higher-speed or higher-capacity mobile network capability, the usage that occurs on the new technology or additional spectrum provides relief and improved performance for all users of the legacy capabilities and resources. This includes those who have not yet upgraded their devices to ones including the new technology or accessing the additional spectrum. 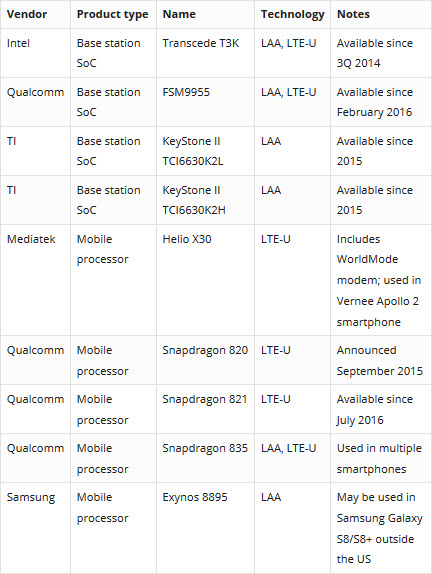 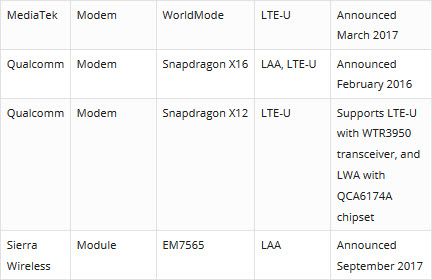 Carriers may initially focus deployment LAA on places where crowds gather, such as in sports stadiums, but roll-outs will spread much wider. Adding carriers on existing cell sites is almost always cheaper than splitting cells or making HetNets with addition of new sites. But the former is only possible in licensed frequencies when additional spectrum is already owned or can be bought. Additional free spectrum is, therefore, a very compelling opportunity. 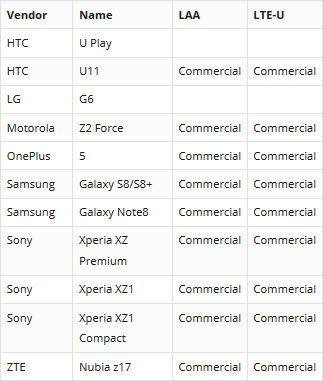 With it being New Year predictions time, I thought I might as well stick my neck out to answer the question of how significant demand for LAA might become? Hugely: but consumers will likely be oblivious to when LAA being used; just like they are not aware of their smartphones switching from low bands to high bands or aggregating spectrum from both with LTE.

Whereas innovations such as multi-touch displays, fingerprint recognition and removing the 3.5mm audio socket are literally, as well as figuratively, much more tangible to users; LAA is nevertheless most significant. LAA also significantly leverages prerequisite innovations in carrier aggregation: LAA aggregates unlicensed with licensed spectrum bands, as indicated above. CA was first introduced in 3G with CDMA 2000 EV-DO Rev B and HSPA+. That was several years before CA was added to 4G to become the defining feature of LTE Advanced (Release 10, 2011).

It is particularly attractive for operators to implement LAA because it is relatively cheap to deploy and promises to reduce multi-RAT headaches and the operational costs involved in managing a WiFi hotspot network alongside LTE and all a carrier's other legacy cellular RATs. The incremental cost in device manufacture is small: any initial price premium for LAA will be rapidly eroded. For carriers, the carrot for deploying LAA is lots of additional capacity at no spectrum cost. The stick is that other carriers will deploy LAA regardless. In competition, the addition of lots of cheap new capacity on the market is inevitable.

A whole lot more for your money

In economics, limited supply tends to raise or at least buoys prices. Despite that, in cellular services with spectrum constraints, high fixed costs for cell sites and a limited number of carriers in any area, price competition in mobile broadband services has raged since the outset at least a decade ago with the widespread introduction of HSDPA.

I described this long-running race to the bottom of carriers' mobile broadband service pricing worldwide in my September 2017 contribution to RCR Wireless. Prices are dropping at around the same rate as consumption is increasing. Disregard all the nonsense you might read suggesting changes in ARPU represent price changes - ARPU is a measure of total expenditure, not of price. Mobile data consumption, measured in bytes, is increasing 1,000-fold over 25 years since 2010 - as I predicted in 2011, verified in 2016 and as Ericsson's Mobility Reports are continuing to confirm. With total carrier services revenues flat in recent years, prices - the amount of money paid per GB of data consumed - are also falling by a factor of 1,000 over the same period. This amounts to a compounded price reduction of 24 percent per year.

These trends in traffic growth and price declines will not abate when a major supply constraint in the industry is significantly lifted as more than 100 MHz of additional free spectrum is unleashed upon the market.

Get Your Business to Work!: 7 Steps to Earning More, Working Less and Living the Life You Want