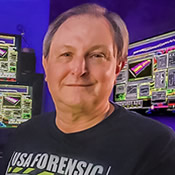 Bryan Neumeister, CEO of USA Forensics, is a court certified Audio and Video Forensic Expert. Mr. Neumeister has over 34 years of professional experience Clarifying Videos, Still Pictures (film and digital), and Audio Recordings so that jurors can better see and hear evidence. With studios and forensic equipment more advanced than most Federal Agencies, he is able video to large format still pictures for use as Exemplars.

Mr. Neumeister presents high resolution video in court to explain Procedure or Evidence of Tampering to juries. Using 3D Sonograph and Spectrograph printouts, he can also spot and visually explain the “altering of tapes." His Video Recreations have been honored at the Canne Film Festival and have received 39 Emmy Awards from the National Association of Television Arts and Sciences for Technical Excellence.

The Synergy of One: Creating High-Performing Sustainable Organizations Through Integrated Performance Leadership