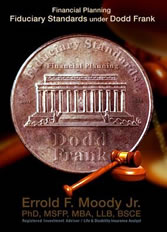 This commentary will be a little terse due to the huge losses sustained by consumers in 2000 and 2008. (Frankly I see a storm in the not too distance which could humble 2008.) The point being that planners had to have known some of the material issues that would impact the investments they were using- particularly mutual funds and ETFs with 401ks, IRAs, ROTHS. They did not. While I understand the problem with newly ‘minted’ advisors- those who had at least a minimum 5 year’s worth of experience and those acting in a fiduciary in whatever capacity, were certainly bound under the best interests format to know the elements of basic economics and the implications thereof.

What’s the issue? The inverted yield curve. The great injustice to all is that this fact was known by (apparently) just a few due to poor initial licensing instruction/knowledge as defined by the SEC/FINRA (where there is nothing on how to use a financial calculator) and inadequate continuing education by the planning organizations (CFA, CFP, ChFC, CPA et al;) overseeing their memberships. (And it made little inroads with my students in 1999. The Dotcom was going to last forever and risk was not a valid subject. But the issue HAD to be taught the real life implications. There was/is nothing else that has been 100% ‘guide’.) Unfortunately, even if it was mentioned in formal texts or study material it generally was “denoting that short term borrowing costs are higher than long term borrowing costs” (early 2000s CFP study manual). So what? Somewhere the material must absolutely show the real life implications or why bother. Charlie Munger noted- “Well, the first rule is that you can't really know anything if you just remember isolated facts and try and bang 'em back. You've got to have models in your head. And you've got to array your experience both vicarious and direct on this latticework of models. You may have noticed students who just try to remember and pound back what is remembered. Well, they fail in school and in life. What are the models? Well, the first rule is that you've got to have multiple models because if you just have one or two that you're using, the nature of human psychology is such that you'll torture reality so that it fits your models, or at least you'll think it does. And the models have to come from multiple disciplines because all the wisdom of the world is not to be found in one little academic department.”  (EFM- the multiple discipline approach is mandatory but it took me a very long time to figure out what went where and why. There were no models to follow. The longest and hardest discipline was insurance. Independent analysis was extremely difficult to find- most was the marketing of a product that few understood.)

It is necessary to note that the inverted yield curve is not responsible for a recession. It is merely a tool that indicates that not all is well. It does not indicate when it would happen (generally within 12 to 14 months) nor how bad it would be nor how long it was going to last.  In 2000- 2003 consumers had a 49% loss in the S&P 500 and a whale of a lot more for those in tech. Yet I do not remember reading an article in 1999 or 2000 expressing what could and did happen so that advisors were adequately prepared to adjust portfolios (though there must have been something somewhere really expressing the problem. I just don’t remember seeing it.) Admittedly a 100% statistic does not have to be perfect the next time, but one cannot dismiss the inverted yield curve out of hand. It COULD happen again- and has. Therefore a fiduciary was responsible for knowing about it and reacting accordingly. Since few formal portfolio alternatives existed in 2000, the best bet in a downward recessionary market is to remove, obviously, the equities first and possibly leave bond funds/other safe products alone. One might suggest taking all equities out at the same time though I think a measured amount going to cash/bonds and other safe positions when the loss went from 10% to 13% or 15% was an obvious ‘alternative’.  The returns on bonds was acceptable- however the overall concern was to avoid loss more than about 12% of equities.  (The effort was not as concise then and now but the intent to avoid losses greater than a correction remains fixed.)

An effort to knowledge should have been obvious to those who went through 2000- what if it happens again? Unfortunately, I just did not see fiduciaries address the issue even after 2000. Did they see it as an outlier/black swan that one could not happen again so why bother? I do not know, but outlier or not, the curve inverted in 2006. At that point, fiduciaries had to attempt whatever work was necessary to protect their investors. They had several years for reading and research but, again, I do not remember articles clearly noting the value of using an inverted yield curve. I know a number of advisors- not a one used the inversion in 2000. As regards 2008, a few used untested alternatives that failed miserably and did not even return that much (compared to the market) prior to the recession.

For 2008, everything fell down. The focus was the same for equities but bonds were getting hammered as well and were removed to cash and similar so they could be put into CDs that were earning about 4%.

(Do not think that my positioning was always perfect- it was not. The equity part was OK and the bond usage in 2000 worked. But the 2008 ‘mess’ slowed and the conversion of bonds did not go smoothly. All that said, the losses were minimal for both recessions. Further, the reduction to cash left consumers with access to liquid assets and cash which was available for income for retirement and other emergencies.)

The losses were 49% in 2000 and 57% top to bottom. These losses crippled the general consumer- and almost all retirees- who had believed that buy and hold was the only mantra advocated anywhere. Therein is the failure of the industry to recognize a simple statistic which had held up reliably. And it is actually identified with Munger’s quote above- “Well, the first rule is that you can't really know anything if you just remember isolated facts and try and bang 'em back”. Real life analysis has to be known. If no one or organization- those responsible for education- are unreliable or clueless- where is this insight going to come from- Dogbert?

Is the responsibility to know this type of information/knowledge if you outsource the investing to other firms? Yes.  For advisers to make complex decisions, they need adequate information, formal experience and guiding principles. And training in real life fundamentals. You have to know that few understand such basics. Therefore YOU have to know. But you won’t get it by just sitting there like a lump.

While pundits may rail at my lack of tact, it simply is impossible to guide consumers to the best investments with the best guidelines and completely miss the risks of what should have been manageable losses in a recession.

An inverted curve has been a 100% indicator of an upcoming recession for decades. Don’t know when/if it will happen again per the activities via Quantitative Easing- and now a change as the FED raises rates.  (I think it is still valid)  Finally for the six people that read all this, here is  a short video by Dr. Komal Sri-Kumar, the president of macroeconomic consulting firm Sri-Kumar Global Strategies. Go to EFMoody.com. Click Daily Commentary. Scroll down (dates are shown on the left) to 9/5: Inverted Yield Curve, 2 minutes, But you will also note more and diverse financial material ANYWHERE as you scroll down.

All was just doubly verified by a Richard Bernstein webinar- the inverted curve is a recipe for a recession.

Errold F. Moody, Jr., has the most extensive background in Financial Planning in the United States (Ph.D., MSFP, MBA, LLB, BSCE). Dr. Moody has over 50 years of hands-on experience as a financial and real estate consultant to various title companies, corporations, CPA's, attorneys, partnerships, credit unions, non-profit organizations and individuals. For the last15 years, his major effort/focus has been to provide education and guidelines regarding the fiduciary responsibility owed by the industry to the middle and lower class consumers (though valid at any level). The above article covers the critical, non transparent areas needing SEC, FINRA, DOL, ERISA rules revisions et al before the industry can truly help consumers with a real life understanding and knowledge of RISK.

In most courts, the value of a human being is not recognized. According to the laws of many states, your life isn't worth a "plugged nickel" if you no longer work.

This article finds evidence consistent with the hypothesis that managers consider personal risk when making decisions that affect firm risk. I find that Chief Executive Officers (CEOs) with more personal wealth vested in firm equity tend to diversify. CEOs who are specialists at the existing technology tend to buy similar technologies. When specialists have many years vested, they tend to diversify, however. Poor performance in the existing lines of business is associated with movements into new lines of business.

Most lawyers know how big a problem occupational fraud is in corporate America. They may even count as clients companies that have been defrauded and suffered significant losses. Yet a "not at my firm" attitude persists among many partners who take for granted the honesty and integrity of their colleagues and staff.