Why do tractors rollover?

A Bad Situation Gets Worse 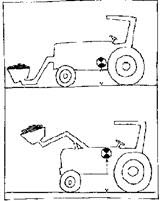 Figure 2: Lifting a loader raises the tractor's center of gravity.

To determine the effects of this raised center of gravity, Safety Engineering Resources determined the rollover angle, the angle where the tractor is balanced. This is a useful measure of tractor stability, since tractors are driven across slopes, on road embankments, and other places where the tractor will be traveling at an angle. We found that the tractor we were testing would tip over if it reached an angle greater than 39 degrees. This angle is twenty degrees less than it was when the tractor did not have the loader attached.

Although tractor operators are sure to be aware of rollover accidents, what they don't know is how easily they can occur. A front-end loader also puts more weight towards the front of the tractor, which can make the tractor more difficult to turn, which can lead to an accident. 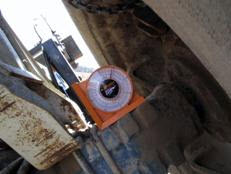 The following graph shows the change in rollover angle. The rollover angle is a measure of the stability of the tractor which incorporates the weight distribution, the center of gravity, the effect of adding a loader and a load.

There are many events that can trigger a rollover accident to a tractor with a high center of gravity. Rocks, stumps, and holes in fields can exert upward force on the tractor if driven over. This upward force can cause the tractor to roll. Drivers raising their loaders while driving to dump their load can easily lose stability of their tractor, due to the elevated center of gravity, resulting in a rollover.

Tractor operators sometimes think that they can prevent a rollover accident by turning their tractor towards the direction of instability. Although it's worth a try, people cannot react before an accident occurs. Side over-turns can occur in 0.75 seconds. Most people need between .3 and 1 second or more to react to an event, once realization has been made.

Tractors are unstable. Attachments make them more unstable. Safe operating practices can reduce the chance of a rollover accident, but not eliminate it. Tractor manufacturers have a responsibility to protect the users of their products from harm. The fact that rollover accidents occur all of the time during normal tractor use signifies that the accidents are not due to some unforeseen use. Tractor manufacturers have not solved the root problem, tractor instability. Ideally, tractor manufacturers would take the ball and come up with a tractor design that is not inherently unstable. They have yet to do this. The only other option to tractor manufacturers while they continue to sell dangerous products, is to guard the tractor user from harm. The National Safety Council's Hierarchy of Design holds that if the hazard cannot (or will not) be designed out of the product, then the user must be guarded from the hazard. This is the function of Rollover Protective Structures (ROPS). ROPS are high-strength steel cages that enclose the operator zone and protect the driver in the event of a roll over. ROPS are designed to limit roll to 90 degrees. Seat belts are a very important integral part of the ROPS system. Tractor users have been severely injured or killed when they rolled their tractors, equipped with ROPS, without safety belts in use. They were crushed by the tractor when they fell out of the operator's seat when the tractor rolled over. In the event of a roll over, the driver can easily be dislodged from the driver's seat by gravity or by the centrifugal forces generated in a roll over accident. A seat belt keeps the operator in the driver's seat and allows the ROPS to perform its protective capabilities. Without a ROPS, a seat belt can increase the chances of injury in a roll over accident. A driver who is held in his or her seat in a roll over will be crushed if the tractor rolls 180 degrees or more.

Tractor owners without a ROPS should equip their tractors with a ROPS. There are many after-market options today. To assure that the ROPS has been designed and tested properly, the ROPS should meet or exceed the performance standards established by the American Society of Agricultural Engineers (ASAE), the Society of Automotive Engineers (SAE), or the Occupational Safety and Health Administration (OSHA).

In 1959, the Army Corps of Engineers, the U.S. Department of the Interior, and the states of California, Oregon, and Washington all began requiring ROPS on their tractors. Illinois and North Dakota both passed laws requiring all tractors purchased after 1960 to have rollover protection. In 1965, ASAE and SAE formed a safety committee to research ROPS and produce a standard. This committee reviewed many tractor rollover studies, domestic and foreign. This led to the ASAE S306 Standard in 1967, "Protective Frame - Test Procedures and Performance Requirements." Also in 1967, The National Safety Council published an article recommending that all tractor manufacturers install rollover protective systems. In 1971 California required all tractors with more than twenty horsepower, manufactured after April 1, 1971, to be equipped with ROPS. On October 25, 1976, the Occupational Safety and Health Administration (OSHA) issued regulations requiring all tractors used by an employee manufactured after October 25, 1976 to be equipped with ROPS. In 1977, California passed legislation requiring all tractors older than 1971 to be retrofitted with a ROPS by 1977.

Numerous studies have shown that ROPS, along with seatbelt use, drastically reduces tractor rollover fatalities. When North Dakota implemented overturn protection on its highway mowing machinery, nearly ALL of the state's tractor fatalities were eliminated. Illinois also required ROPS on all mowing tractors purchased after 1960. This greatly reduced the state's tractor fatality rate. A study by the National Institute for Occupational Safety and Health (NIOSH) in Nebraska found that since 1967, there were 250 tractor rollover accidents on tractors without ROPS, and 61 tractor roll over accidents on tractors with ROPS. Forty percent (100 people) of the drivers on tractors not equipped with ROPS died in the accidents. Only two percent (one person) of the accidents involving tractors with ROPS occurred in a fatality, and that person was not using a seat belt. Another study by the University of Iowa and the Iowa State University found that tractor operators survive 95% of the time in roll over accidents on tractors equipped with ROPS. This same study found that tractor operators survive only 25% of the time in roll over accidents on tractors without ROPS. A paper put out by the University of Illinois Agricultural Engineering Sciences Department states that farmers whose tractors are not equipped with ROPS are exposing themselves to "unnecessary risk". These studies show the effectiveness of ROPS. Since ROPS have been proven to save many lives, why aren't they required on all tractors, past and present?

Today, there are many product liability cases involving ROPS. Some states have made this difficult by making restrictive laws that prevent tractors to be shown as defective without a ROPS, since tractor operators should know that tractors can roll over. They are in essence putting the blame on the operator not the manufacturer. We are currently involved in a ROPS case where we have to show that tractor operators don't realize how easy it is to roll a tractor. Cases like this may help to change the laws and require the tractor manufacturers to do what they should have done in 1976 - retrofit their tractors with ROPS. The reams of accidents and fatalities proves, in my opinion, that a tractor without a ROPS is unreasonably dangerous.

The primary function of all guarding is to prevent an operator or bystander from being injured by a potentially dangerous portion of a machine. Often the hazard involves moving parts with the potential to cut, crush or draw-in body parts, although barrier guards may also be necessary when electrical, thermal or chemical dangers are present.

Forklifts, industrial trucks, skid steer loaders, bobcats and other similar material-handling machines are often difficult to maneuver and susceptible to a wide range of accidents. Their nature exposes operators and nearby co-workers to falling loads, crushing hazards and lading dock falls.