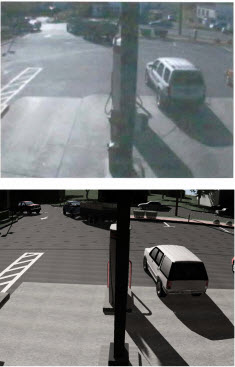 Animations are a powerful tool to illustrate how an accident occurred, and to make an engineer's accident reconstruction more accessible to individuals without engineering expertise. In a recent case, we were able to make a 3d animation that showed the plaintiff's description of how an accident occurred was not consistent with the forensic evidence at the scene. We were also able to compare our animation to a security video from a nearby gas station that captured the accident, showing that our reconstruction and animation matched the security video footage (see comparison to the left).

On a clear fall day, a motorcycle operator was driving westbound along a two lane road behind a Ford pickup truck. As they both approached a nearby intersection, the Ford turned right into a gas station on the corner, while the motorcycle rider continued straight. At the same time, a Chevy pickup towing a utility trailer, which was waiting to exit the same gas station, began making a left turn into the eastbound lanes, while another eastbound vehicle was waiting to enter the gas station. Consequently, before the Chevy driver completed its left turn, he struck the right side of the motorcycle, knocking it over, causing it to leave a gouge mark in the road and severely injuring the rider. However, during their depositions, the defendant Chevy pickup driver as well as two nearby eyewitness claimed that the Ford pickup driver had stopped in the road to let the Chevy turn and that the motorcycle must have driven around the left side of the Ford, making an improper passing maneuver. Fortunately, the motions of the vehicles prior to and during the accident were partially captured by two security cameras at the nearby gas station. Technology Associates was asked to perform an accident reconstruction and accident animation based upon the physical evidence and the available security camera video. 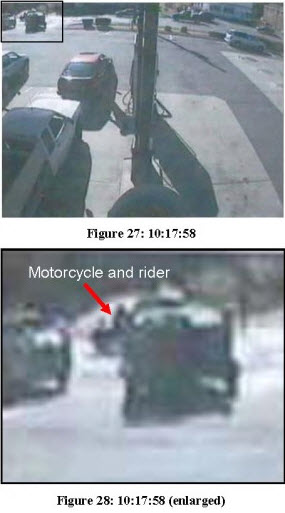 The available surveillance video of the accident showed partially obscured views of the vehicles up to, including and beyond the moment of impact in the background region of two separate security cameras. In both camera views, the Chevy pickup and trailer were clearly visible, allowing us to determine that after the driver pulled away from the gas pump, he waited approximately 15 seconds from the time he came to a stop in the parking lot exit to the time he pulled out into the road. The Ford pickup first entered the security camera field of view approximately 1 second after the Chevy started its left turn, directly contradicting the Chevy driver's testimony. Furthermore, during the time it was visible in the surveillance footage, the Ford pickup truck was never located in the same position in two consecutive frames, indicating that it was constantly in motion during this time, regardless of whether or not it came to a stop while it was off camera.

Technology Associates was also able to identify the motorcycle in several video frames, by comparing certain successive frames from immediately before the moment of impact. Based on this video analysis, combined with an inspection of the scene and the location of the gouge marks in the roadway, we were able to prove, irrefutably, that the motorcycle did not pass the Ford pickup while it was stopped as several witnesses had testified.

The surveillance video also allowed us to perform a vehicle motion analysis based upon our inspection of the accident site and the subject vehicles, thus determining the position of each vehicle at various moments in time relative to features of the scene and other landmarks measured at our inspections. In addition, we were able to calculate certain vehicle speeds for those vehicles that were visible in multiple video frames. This was relevant because the Chevy driver testified that the impact occurred in the eastbound lane (i.e. that the motorcycle had left his proper lane of travel), but by analyzing the surveillance footage, we were able to demonstrate that the impact actually occurred in the motorcycle's westbound lane. This motion analysis was then combined with all the other available information to create computer-generated three-dimensional animations of the accident.

The animations not only matched the surveillance video, but also showed the vehicle motions from alternate points of view, that were not obscured. Upon showing these animations to the defendant, the plaintiff was able to obtain a favorable settlement.

When an understanding of complex motions associated with various accidents is required, computer simulation is an invaluable tool, which allows the modeling and visualization of rollovers and collisions. In addition to vehicle accidents, computer simulation can also be used to create many other systems of masses and contacting surfaces, such as a toppling light pole after it has been struck.

Electric fires are becoming more common as appliances and electric feeds are used more and more in our daily lives. Like other fires, the root cause of an electric fire is the introduction of heat, oxygen, and fuel.

Doors and gates, whether automated or manual, can pose a serious hazard to users if not designed, manufactured, installed and maintained properly. The different types include automatic doors, overhead garage doors, elevator doors, sliding doors, swinging doors, and automatic gates.