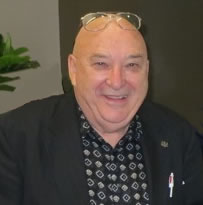 How Wide is the Test Window?

The currently most frequently requested tests, or, analytes in the Drugs of Abuse category are listed below. However, as will be discussed later in this report, there are other designations that refer the these same drugs or drug classes. Furthermore, if one were to make an exhaustive listing of all of the many "Street Names" for these available drug products, the listing would have several hundred entries.

A most important point to understand in regard to Drug Screening Test Results is that the drugs listed above are the "Active" drugs, or, in the case of Marijuana, the source of the "Active" component known as THC/ Terahydrocannabinol. These "Active" drugs are specific chemical compounds that have direct effects upon the body of the drug user. These direct effects of the "Active" forms of the drugs lead to the Clinical effects such as the "HIGH", "Rush", etc. However, not all of the Immunoassay-based Screening Testing Procedures are based upon the "Active" chemical form of the drug! More specifically, the tests for possible Cocaine as-well-as Marijuana use are based upon tests using "Inactive" chemicals. These two testing procedures employ the primary breakdown products of the drugs in the body known as Metabolites as the bases for the test kits. Thus, the Cocaine test is noted as "Cocaine Metabolites" since the metabolite known as Benzoyl Ecgonine is used to manufacture the test kit. The Marijuana test is noted as THC-COOH, or, Cannabinoids since the acid, delta-9-THC acid, is used in the process. 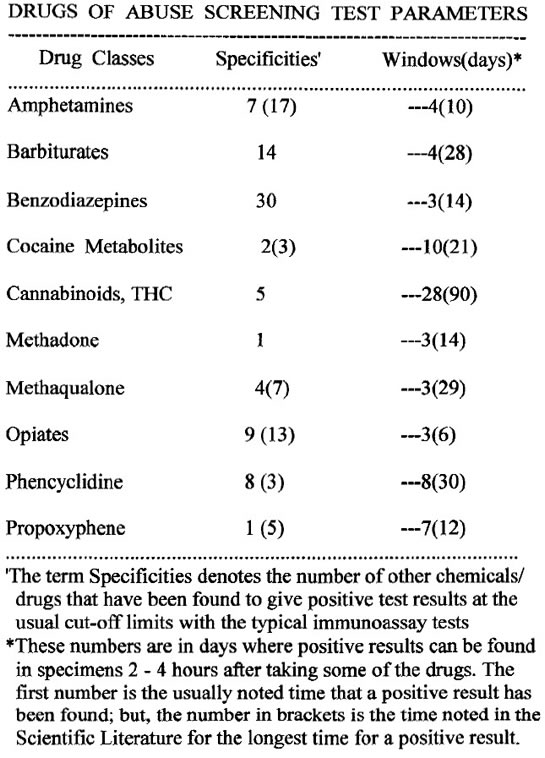 Although both of these tests would possibly afford positive test results for Cocaine and Marijuana in some interpretations of the test results, these test data in NO WAY can be considered to infer anything about the clinical condition of the test subject! Likewise, even with the other tests in the above listing where the more-or-less "Active" forms of the drugs were used to manufacture the test kits, no suggestions as to the clinical condition of the subject can be afforded based upon the test results. Urine excretion of drugs and/or their metabolites is very variable as to amount and time; and, there is little-or-no clinical utility except to suggest possible previous voluntary ingestion. Obviously, one must always keep in mind the possibility of involuntary ingestion in the case of passive inhalation of Marijuana or Cocaine as-well-as surreptitious adulteration of some food or beverage or-the-like.

The following Table is a summary of some of the points noted above, and, affords additional information relative to the utility of Urine Drug Screening Test Results as the three topics designated by the column headings. The first column, Drug Classes, is a listing of the drug-based tests that are considered to generally represent the commonly abused substances except for Alcohol. These 10 drugs or groupings of similar drugs are the terms that are commonly used in communications among drug-use monitoring professionals. Thus, in general, most persons are aware that the monoclonal antibody assay screening test for Amphetamines affords information on Amphetamines, Methamphetamines, Methylenedioxyamphetamine{MDA), and, Methylenedioxymethamphetamine (MDMA, Ecstasy). But, as shown in the Table, the test is not specific for anyone Amphetamine-like chemical/drug; and, at least 10 drug-products can lead to a positive test result for "Amphetamines". And, if you look further down the table, you will find the category "Benzodiazepines". This is the Valium-like class of drugs with at least 30 possible known chemicals/drug-products that can afford a positive test result. However, the information in the last column(Windows), may present some of the most critical data in terms of monitoring the alleged Drug Abusing Patient. As is noted in the footnote to the Table, some of the drugs can lead to a positive urine screening result within a few hours after use. If it is assumed that most drug abuse is an evening-night time activity, then, the lag time until excretion is of little consequence. However, most people hold the opinion that the drug, and, metabolite(s) are cleared in a couple days for most drugs. And, some reports from single-use studies with non-addict patients show such a rapid return to negative urine drug screening test results. However, for some people, and, especially the chronic and/or heavy drug user, the periods(Windows) of known positive urine test results are shown in the Table by the numbers in brackets. These actual urinary excretion times are much longer than the usually published numbers as noted by the immediately preceding numbers. These possible periods of extended excretion are most important for the person trying to interpret the drug test data. For example, given the usual expectation of a positive Phencyclidine (PCP) result being likely for about 8 days after drug use, one could order another drop in a week or so. But, should that patient be one whose excretion pattern is longer than the usual, a second positive result would suggest recent drug use. What is the truth of the matter? One could use these extended excretion data to plan a testing schedule that would be less likely to afford a False Positive Result in terms of a recent drug use event.

Following up on the possibility that an extended or slow excretion of some drug and/or metabolite could lead to a false accusation of drug use, some specific similar circumstances are herewith noted. Recently, a report has appeared that showed a reversal of the concentration ratio of the heroin metabolite 6-AM to Morphine in the urine. Usually, within a 1-day period after heroin use, the amount of the 6-AM metabolite is only 5 - 10 % of that of Morphine in the urine. In the 2 patients, however, the amount of 6-AM was 12-times that of Morphine. The Morphine test was initially Negative; and, then subsequently Positive due to the metabolism of the 6-AM to Morphine. Fortunately, these twins were known heroin users which fact allowed the discovery of this unusual circumstance. The Cocaine user may, however, afford a different scenario. It is known that the nearly simultaneous use of Cocaine and Alcohol is a common situation. The reason seems to be because Alcohol forms a new kind of Cocaine known as Cocaethylene in the body of the user. Cocaethylene is more slowly removed from the body; and, could lead to a prolonged excretion of positive testing metabolites in the urine. In such a situation, one could suggest that the known Cocaine user should also have a urine Alcohol test performed. To take this one step further, if the Cocaine user is a Female, then, the Alcohol test should become mandatory! The basis for this recommendation is that being a Cocaine Baby is not known to result in a demonstrably abnormal person. However, being a Fetal Alcohol Syndrome Baby is known to frequently result in an abnormal person.

Dr. John P. Bederka, PhD has over 30 years of experience as a Toxicologist with specialized knowledge of Chemistry, Pharmacology, and Neuropharmacology. Dr. Bederka served as Section Head of Toxicology and Therapeutic Drug Monitoring for the Abraham Lincoln School of Medicine at the University of Illinois Medical Center. His practice covers Occupational Exposure, Residential Exposure, Adverse Health Effects, and Chemical Substances of Abuse.

The Butcher's Cleaver: (A Tale of the Confederate Secret Services.)