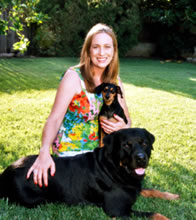 As everyone gathered in the kitchen to prepare for an extended family dinner, Mother took a large ham and cut off a big piece of the end and put it in another smaller pan to cook. As she prepared the two baking dishes, one of the grandchildren asked, "Grandma, why do you cut off part of the ham?"

"Well, that's the way I learned how to do it from my Mom, your great grandmother."

One of the Aunts says, "I thought it was because Dad liked to have his own separate piece."

An Uncle says "I thought it was because it made the meat more tender." A different Aunt chimes in, "Mom said it was just the way it was always done."

Curious, they decide to ask Great Grandmother the reason why the end of the ham was separated.

Tail docking (amputation of the tail) has been done on dogs for hundreds of years. A variety of justifications have been offered, usually in accordance to the historical tasks of the breed. For instance, in hunting dogs, conventional wisdom said it was to prevent injury in the field from nettles, burrs or sticks; in herding or bull-baiting dogs it was thought to help avoid injury from large livestock.

In truth, there are two primary historical reasons for docking. For our mastiff-based working dogs that accompanied the ancient Romans, it was believed that tail docking and tongue clipping would ward off rabies.i Obviously, this was before modern bacteriology and vaccines, when rabies was still a feared, lethal zoonotic disease that raced through cities and countrysides, infecting all mammals encountered in its path.

Second, in the 17th century, pleasure/companion dogs in England were taxed, and "working" dogs, designated by docking, were not. Therefore many of the herding (farm), terrier (ratters), and some of the hunting (pointers) dogs were docked, to avoid paying the tax. Funnily, many of the English hunting dog breeds were not docked, as hunting was a pastime of wealthy landowners, and it was a sign that they could afford the tax.

The dog tax was repealed in 1796, and Pasteur discovered a rabies vaccine in 1885.ii Nonetheless, tail docking continued unquestioned and unabated. Docked tails had become part of the description some dogs' breed picture, and with dogs being property, breeders and owners were allowed to physically alter animals at their discretion. However, tail docking and ear cropping began to be seriously questioned several decades ago by veterinary communities around the world. Armed with modern understandings of physiology, kinesiology, behavior and cognition, pain response and trauma in higher order vertebrate mammals, the practice came under intense scrutiny for therapeutic or prophylaxis need, and failed.

When tail docking was banned in the European Union in 1998, it was rumored and readily accepted in the American pure-bred dog community that the animal rights activist community (i.e., PETA and HSUS) had somehow pushed their agenda through to curtail animal ownership rights without the knowledge or consent of the general public in Europe. In truth, the ban was proposed and endorsed by the World Veterinary Association and the World Organisation for Animal Health, which is part of the World Trade Organisation. Turns out it wasn't the animal protection groups at all-it was the professional veterinary associations! National veterinary organizations such as the Royal College of Veterinary Surgeons (UK), the Canadian Veterinary Medical Association, the Australian Veterinary Association, and yes, even the American Veterinary Association (hereafter referred to as AVMA)-just to name a few-- have all issued public position statements against tail docking.

The same speculation was addressed here in the United States by the AVMA. Dr. Golab, director of the AVMA Animal Welfare Division, noted in the Journal of American Veterinary Medical Association (JAVMA), "The reason [the revision] came up is because of the review requirement. We were not approached by the HSUS; we were not approached by PETA; nor did anyone else call to ask us to change the policy."iii The records show that the AVMA has stood against cosmetic procedures done on dogs since 1976. In 1999, after the EU ban in 1998, the AMVA released this official resolution,

"Ear cropping and tail docking in dogs for cosmetic reasons are not medically indicated nor of benefit to the patient. These procedures cause pain and distress, and, as with all surgical procedures, are accompanied by inherent risks of anesthesia, blood loss, and infection. Therefore, veterinarians should counsel dog owners about these matters before agreeing to perform these surgeries."iv

The issue continued to be contentious among veterinarians, breeders and dog owners. Studies, which will be synopsized for the purpose of this article, produced evidence of actual harm to dogs undergoing tail docking, further bolstering veterinary associations' position worldwide. Thus, in 2008, the AVMA announced their new and simplified policy:

Jill Kessler Miller is an expert in the field of Dog Behavior. A certified dog trainer for over twenty-five years, she specializes in Rottweilers, mastiff-based breeds, American Pit Bull Terriers and other bully breeds.

Screening Questions You Should Ask When Buying a Horse

There are some very important preliminary questions you should always ask when buying a horse. These screening questions should be asked right up front. If at all possible, you should ask these questions initially on the phone prior to seeing the horse.

Owning A Horse Is A Huge Financial Investment: Get A Pre-Purchase Exam!

You've decided to buy a horse and you have now located the horse of your dreams. There are a lot of emotions involved.

Protect Yourself When Buying A Horse

Because the cost of a lawsuit is so steep, make sure your "horse transaction" is memorialized with a lawyer-prepared, well-written contract. The small contract prep charge will be a fraction of litigation expenses and heartbreak. If you cannot locate an equine attorney, an attorney specializing in contracts will work just fine. It always amazes me that written contracts are not demanded of every horse purchase or sale. Even on "small&qout transactions…demand them in writing or do not do the "deal&qout!