Cervical arterial dissections most commonly occur in the carotid arteries, followed by the vertebral arteries. Vertebral artery dissection (VAD) often presents after a trivial injury such as hyperextension of the neck while at the salon, checking a blind spot while driving, chiropractic manipulation, riding a roller coaster, or, as in my case, coughing. There are some key differences that can help distinguish carotid from vertebral dissection.

Carotid artery dissection classically presents as a 'thunderclap headache' with unilateral facial, neck or head pain and a partial Horner’s syndrome (miosis and ptosis, but not anhydrosis). About one-third of patients will have a TIA within one week (neurological symptoms lag behind because it takes time to have a thrombus formed and thrown from the site of dissection). VAD on the other hand, presents with posterior neck or occipital pain and posterior circulation symptoms (ataxia, vertigo, dysarthria, etc). Diagnosis of both conditions is made by CT-angiogram. 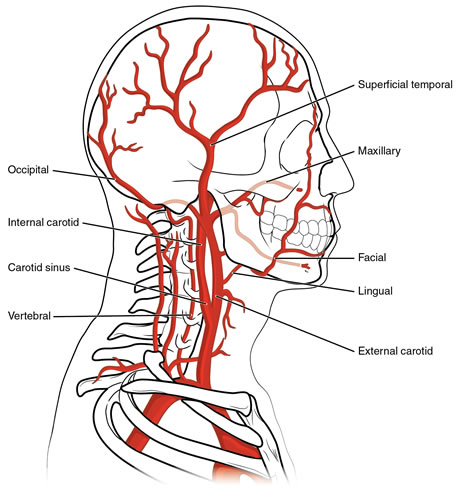 A systematic review of 75 published reports confirms that presentation can be nebulous: a high index of suspicion is necessary or it will be missed. This review found that the three most common presenting symptoms for VAD were dizziness (58%), headache (51%), and neck pain (46%). To put it another way, 49% of patients with VAD did not have a headache and 42% did not have dizziness. VAD is more common in younger patients with an average age of 45 years (compared to an average age of 65+ for stroke victims). While incidence has increased in the past decade (probably due to improved imaging modalities), these numbers are still hugely misleading. The reported incidence of spontaneous cervical arterial dissection is 3-5 per 100,000, but the true number of cases is no doubt much higher.

Younger stroke victims often ignore the symptoms, and because they are young and healthy, doctors may not consider stroke as a cause. This point cannot be emphasized enough: cervical artery dissections are a real cause of stroke in young people, including pediatric patients. Don’t fall prey to bias and dismiss a young person with neurologic findings (even in the absence of any risk factors).

The severity depends on whether the dissection occurs before or after the affected artery enters the skull. Intra-cranial dissection occurs in more than half of cases and has a much poorer prognosis than extra-cranial dissection. All patients with cervical artery dissection should be admitted as even those who are relatively asymptomatic may progress to ischemic stroke. Arguments could be made for neurology, neurosurgery, or interventional radiology to be the primary caretaker of such patients.

The long-term treatment is Aspirin 325 mg daily or anticoagulation with Warfarin for 3-6 months. Both have been shown to reduce the progression to ischemic stroke and no study has ever shown a significant advantage of anticoagulation over anti-platelet therapy. As a general rule, a Heparin drip should be started in the ED and, once admitted, a decision can be made about Aspirin versus Warfarin.

Dr. Maryam Ashadcompleted her EM residency at Emory University and is the author of Medical Ethics 101.

Myasthenic crisis is a rapidly progressive and potentially fatal condition. Early consideration and bedside confirmatory tests are essential. Have a low threshold to establish a definitive airway using higher than typical doses of paralytic medications. Involve the consultant early and be extra vigilant when caring for anyone with a history of myasthenia gravis