Abstract -- In order to determine a mouse's dose accurately and prior to engaging in live mouse radiobiological research, a tissue-equivalent tumor-bearing phantom mouse was constructed and bored to accommodate detectors. Comparisons were made among four different types of radiation detectors, each inserted into the mouse phantom for radiation measurement under a 6 MV linear accelerator beam. Dose detection response from a diode, thermoluminescent dosimeters, and metal-oxide semiconductor field-effect transistors were used and compared to that of a reference pinpoint ionization chamber. A computerized treatment planning system was also directly compared to the chamber. Each detector system demonstrated results similar to the dose computed by the treatment planning system, although some differences were noted. The average disagreement from an accelerator calibrated output dose prescription in the range of 200-400 cGy was -0.4% ±0.5σ for the diode, -2.4% ±2.6σ for the TLD, -2.9% ±5.0σ for the MOSFET, and +1.3% ±1.4σ for the treatment planning system. This phantom mouse design is unique, simple, reproducible, and therefore recommended as a standard approach to dosimetry for radiobiological mouse studies by means of any of the detectors used in this study. The authors fully advocate for treatment planning modeling when possible prior to linac-based dose delivery. Health Phys. 101(6):746-753; 2011

MICE HAVE been used in radiobiological research studies for many years. The original development and use of inbred mice for probing the genetic determinants of resistance and susceptibility to infections and tumors was documented from research by Clara J. Lynch (Morse 1978). During the 1920's, she personally brought a mouse strain into the United States from a laboratory in Lausanne, Switzerland (Lynch 1969). The original population was two males and seven females, which Dr. Lynch kept in a secure shoebox and stored in her stateroom on board the ship.1 Once at the laboratory of James B. Murphy in the Rockefeller Institute, they were genetically altered in 1937 with a distinctive phenotype (Morse 1978; Leiter 1993; Chia et al. 2005). Now classified Foxn1nu, these mice have no body hair (Suzuki et al. 2003). These so-called nude mice have a marked ability to engraft many different types of tumor cells from other animals, including humans. Xenografting is a common technique used by radiobiologists to test the characteristics of disease growth, inhibiting drugs, and tumor responses to drugs and radiation by the injection of tumors and drugs into nude mice. An illustration of nude mice subjects is presented in Fig. 1.


Having an immunodeficient research subject is a valuable asset since it removes the single most important degree of freedom: tumor rejection. It is from these studies that novel techniques seen to reduce the size of prostate tumor xenografts have had recent success using drugs injected into mice (Greco et al. 2010). Radiobiologists have valued this animal model for sustained grafted tumor growth, which permits fractionation considerations in therapeutic models, even for radiation therapy (Allam et al. 1995). Almost all radiobiological experiments have been performed with kilovoltage x-ray machines. This is still the primary means of irradiating mouse subjects (Lo et al. 1993; Gorodetsky et al. 1990). Some research has investigated higher photon energy resulting from 137Cs and 60Co radioactive material irradiators or even radionuclides of 90Y (Lazewatsky et al. 2003; Urano et al. 1998; Agarwal et al. 1975). Linear accelerators have rarely been used in such studies (Kumar et al. 2008; Kuroda et al. 1999; Jaffe et al. 1987). This is due to the fact that radiobiologists have difficulty accessing one, since most medical accelerators approved strictly for human therapy are governed by state level radiation control entities. Still, radiation control branches and inspectors general have provided approval for dual use with immunodepressed nude mice when infectious disease control measures are properly in place. Now that megavoltage modalities are being considered more often, dose rates from x-ray machines and radioactive material at 0.4-2.5 Gy min-1 may now be escalated to pulsed dose rates at 4-10 Gy min-1 from accelerators (Stuben 1994).

In order to determine the dose to a mouse accurately and prior to engaging in live mouse radiobiological research, a tissue-equivalent tumor-bearing mouse phantom was constructed and bored to accommodate detectors. Comparisons were made among four different types of radiation detectors, each inserted into the mouse phantom for radiation measurement (Yorke et al. 2005; Metcalfe et al. 1993; Butson et al. 1996; Quach et al. 2000). The dose levels obtained by each instrument were determined relative to the calibrated x-ray output of a 6 MV accelerator. Detectors were placed individually and consecutively within the mock-up mouse subject and placed in a pie cage duplicating radiobiology research procedures for actual measurement of absorbed dose. An intercomparison of detector-determined dose is presented along with a computerized tomography (CT)-based computerized treatment simulation plan. 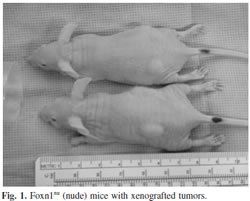 A Braintree Scientific, Inc. (PO Box 361, Braintree, MA 02185) pie cage model MPC with filter model MPC-TP was chosen. As shown in Fig. 2, the acrylic mouse unit is 21.5 cm in diameter and 7.5 cm in height; individual chambers are 5 cm (base) and 9 cm (length). The circular cages secure up to 11 mice in any of 12 wedge-shaped chambers. The notched removable lid can be dialed to any of the ventilated pie-sliced chambers, making it easy to load mice through the single lid opening. This clinical pie cage is widely used by radiobiology researchers and is therefore the most suitable for conducting this research.

It is difficult to measure absorbed dose to mice in vivo. It is even more difficult to measure such doses to mouse tumors in situ. Here, a phantom replica mouse has been chosen to quantify the dose received to living mice. The phantom mouse consisted of a white rubber polycarbonate material with a 7 cmbody length, proportioned to be identical to that of the living mice shown in Fig. 1. The elemental composition is estimated as 85.6% amorphous carbon and 14.4% hydrogen, constituting a butyl solid of tissue-like density. Fig. 3 shows the mouse phantom bored out to accommodate various sized detectors. The detectors used in this research are presented to scale in Fig. 4.

Abstract. Object: Where no society-based or manufacturer guidance on radiation limits to neuromodulation devices is available, this research provides the groundwork for neurosurgeons and radiation oncologists who rely on the computerized treatment plan clinically for cancer patients.