Paintball is a fun activity for all ages, and can be a safe sport if proper precautions are made. Serious eye injury can occur if a paintball impacts the eyeball, making goggles and facemask a requisite part of paintball. Accidents happen in backyard paintball games most frequently, but also at commercial paintball operations. This Clues will examine the typical preventable paintball accidents, as well as examine product failures that can lead to accidents while playing paintball.

Paintball guns (markers) were first produced in the early 80's for the purpose of marking tress for removal for forestry personnel. These first guns were simple single shot paintball markers. The possibilities of using the gelatin filled capsules for recreation soon followed and paintball as a sport was born. Paintball equipment has developed over the years to be extremely high tech, with fully automatic guns and guns with electronic triggers.

Early on standard shop goggles were issued as eye protection for paintball games. Later other types of goggles intended for other purposes such as bicycling were widely used. These goggles could fail on impact with a paintball and cause serious injury to the person wearing the goggles.

Goggles designed specifically for paintball that were made of Lexan started being produced in the early 1990's. Lexan is a polycarbonate polymer with high impact strength and is still the primary material used in paintball eye protection.

Goggle failures of modern goggles now are uncommon, but do occur. Leading manufacturers have issued recalls on defective goggle lens material. Manufacturing and material defects can lead to lens failure and serious eye injury. Incorrect assembly of the goggle and face mask assembly may result in gaps that allow a paintball to penetrate the mask. New and uninformed paintball players may also use shop goggles, motorsports goggles, ski goggles, racquetball goggles, and other goggles that are not intended for paintball impacts.

Eye injury can also occur if a paintball strikes the seal between the mask and the person's head. This may allow the paintball to enter the protected area, or may result in breakage of the paintball, which will send high velocity paint into the eye area. 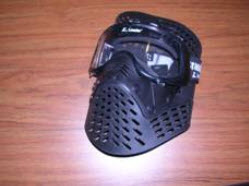 The primary safety concern with potentially defective paintball guns is the velocity that the gun shoots the paintball at. Paintball guns are adjustable and are intended to be used at 300 feet per second or less. Defective guns may release paintballs at velocities higher than 300 fps before the gun user has a chance to change it. Paintballs traveling at excessive speeds can break the skin, and could result in goggle failure.

Paintball guns are powered by pressurized gas cylinders. Originally all guns used carbon dioxide, first in small disposable cylinders, and later in larger capacity reusable cylinders. Nitrogen and compressed air were later introduced. These tanks have rupture discs that are designed to rupture and safely release gas in the event of over pressurization. If the rupture disk is defective or if too thick of a rupture disc is used it may not allow the release of pressure, which could result in tank failure. Damage to a tank may weaken it as well and result in failure. Tanks must be hydrostatically tested periodically to ensure their structural integrity. Larger cylinders used to fill individual players' tanks can also rupture or become a projectile if the tank shell or valve is compromised.

Injuries can occur due to defective paintball equipment as well as from poorly run paintball operations. Backyard games have the worst track record of accidents, with unstructured game play, lack of supervision, potentially unsafe equipment, inadequately safeguarded viewing areas and many other hazards. Paintball fields need to have certain safety procedures that are strictly adhered to.

Chronographs are instruments that measure the speed of paintballs shot from paintball markers. It is essential to paintball field operation to chronograph every gun being used on the field, whether it is owned by the paintball field or by an individual player. This ensures that all players are using markers firing paintballs at a speed less than 300 feet per second, or lower, depending on the individual field rules. Paintball guns can be adjusted to reduce the velocity. This prevents potential goggle failure, as well as open wounds which can occur from high speed paintballs fired on open skin.

Guarding of non-playing areas is another crucial element to paintball operations. Paintballs must not be allowed to reach people or structures that are not part of the paintball game. This can be accomplished with adequate distance from the playing field, or by using natural barriers such as a hillside. Most paintball fields must use netting to provide protection to people not participating in the game. The netting will absorb the impact of the paintball and prevent it from traveling further.

Another crucial element is referees to enforce rules and assist players in distress. Eye goggles cannot protect the eyes if they are not worn by the player. New players' natural instinct may be to remove their masks if they become fogged up due to overheating.

Even with the best equipment, safeguarding of playing areas, and properly supervised games, accidents can happen. Twisted ankles are a common injury resulting from running across uneven ground. More serious falls can result in fractures or lacerations requiring stitches.

What to Look For

Crucial elements of an accident case involving paintball include whether an equipment failure or malfunction resulted in the accident, whether proper equipment was being used, and whether or not the games were being conducted safely with supervision.

Based on a 1961 study at Williamston, MI, conducted by the Michigan State Police, the Indiana University Health and Safety Department, the Michigan Highway Department, and the American Red Cross, it was estimated that approximately 400 persons lose their lives as a result of being trapped in automobiles that have plunged into the water.