Analyst Angle: Gigabit LTE is a milestone on the road to 5G

Recent new technology deployments with gigabit LTE at Telstra in Australia, Sprint in the U.S., and EE in the UK highlight how much mobile communications technologies have improved since the introduction of mobile data services with circuit-switched and then packet-switched offerings from around 20 years ago. Peak and average user speeds have increased by a factor of 10,000. By way of comparison, microprocessor performance doubling every couple of years, as predicted by Moore's Law, has increased it only one thousand-fold over that period. Cellular performance improvements are therefore quite spectacular given the vagaries of connecting through the ether up to hundreds of meters, as well as processing those signals in the confines of around one square centimeter of baseband processor silicon!

These enormous advances are largely the result of major endeavours by several leading firms. Most of the activity in the public records of standards development organization 3GPP is the mere tip of the iceberg in terms of the total amount of development work undertaken, with even more extensive other activities submerged from public view. 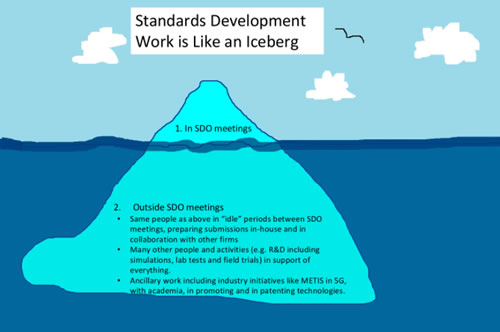 Evolution is Not Overtly Disruptive

Gradual change over many years can be at least as dramatic as more immediate change, but the latter is typically rather more noticeable and headline grabbing. For example, my son and daughters are now young adults - much more grown up and very different in countless ways than they were a decade ago or so - but there was no "tipping point", discontinuity or abrupt metamorphosis. And, so it is with technological innovations: over the last 20 years in mobile communications, initial introduction of features including text messaging, picture messaging, email, polyphonic ringtones (do you remember those?), multi-touch displays, GPS navigation and video telephony each created significant excitement spontaneously. Meanwhile and throughout that extended period, communications technologies that support all the above have been improved continuously with numerous innovations. Many of the latter are very significant and valuable, but invisible to consumers.

From time to time, milestones are reached that indicate how far things have progressed. With our offspring, it is with accomplishments such as walking, talking and events such as university graduation and marriage that are these markers. In mobile communications, a succession of improvements have been mainly to increase network capacity, and, with mass-market data services since around the turn of the millennium, provide ever-faster downlink and uplink speeds. A new-generation technology, once a decade, has been defined by step changes such as from analog to digital and from time division multiple access technologies such as GSM to those such as WCDMA that allow frequency reuse of one; with the same frequencies used in adjacent cells. However, there are far more numerous and more frequent improvements than only those.

The Power of Compounding

Some key innovations in the last decade include the LTE OFDMA waveform, (up to 4×4) MIMO, (up to 256) QAM and (up to 4x) carrier aggregation. Each of these technologies multiplies network speeds significantly. And these multipliers compound (mathematically as interest does over time) to provide theoretical gigabit-per-second LTE peak downlink speeds and capacity when used with up to 60MHz or 80MHz of spectrum in LTE Cat 16 modems including Qualcomm's X16 on Gigabit LTE networks. Peak uplink speeds are not far behind at up 150 Mbps. Commonly-achievable end-user speeds of 80 Mbps and 10 Mbps respectively are transforming the user experience, with, for example, the ability to download video and audio files in seconds rather than minutes.

These technologies are major building blocks from which even faster capabilities will be provided with eMBB, which is one of the three pillars - along with massive machine-type communication and Ultra-reliable and low latency communications - of 5G.

Heavy Lifting by the Few

While marketing departments and the press look for eye-catching new features on specific device models that might surge demand for the latter, it is relentless standards development work with innovations and performance improvements that provide the crucial underpinnings for these - particularly with HD, 4K or even 8K video that sends or receives very large volumes of data over the mobile networks. Development work for this is largely undertaken by a hard core of several major technology-developing firms.

Research on attendance records of all the 3GPP working group meetings between the years (2005-2014) reveals the substantial amount of time and effort that has been devoted by 3GPP participants to the development of 3G and 4G standards. A total of 3,452,040 man hours were spent in 825 working group meetings. This research also reveals that a few highly active firms are largely responsible for the technical development of 3GPP. Distribution of contributions to 3GPP is highly skewed, with a few firms submitting the vast majority. For example, the top 2% (9) of firms are responsible for submitting 60% of all contributions. Furthermore, approximately one-third of all participating firms (33%, 161) have not submitted a single contribution to 3GPP.

However, for those firms that do contribute to standards development, time and money spent outside of SDO meetings typically greatly exceeds that expended in those meetings. Standards development work includes supporting R&D, preparing contributions and coordination among firms in advance on meetings, as depicted with my iceberg analogy. R&D investments of up to 20% of sales revenues, equivalent to several billions of dollars per year each by major contributors, suggests that most standards development work is submerged in comparison to the more visible participation in attending SDO working group meetings.

The numbers of patents and patent applications declared to the ETSI IPR database as possibly being essential to these standards are also very skewed. A small number of companies account for a large proportion of patent declarations. When I last checked, seven companies including Ericsson, Huawei, Nokia, Qualcomm and Samsung accounted for 70% of patent declarations in the period 2008 to mid-2015.

While neither counts of patent declarations nor of contributions to 3GPP working groups provide accurate measures of who owns how many patents that are actually essential to the standards, these figures do indicate which firms are significant players in developing technologies for use in 3GPP standards; even though some companies allegedly try to game the system by inflating their contributions and declarations.

For the Benefit of the Many

The benefits of what is largely developed by the few are rather more widely exploited by technology implementers in products including several hundred cellular device manufacturers, by many hundreds of mobile network operators, by OTT service providers such as Google, Facebook and Netflix, and by consumers. This is increasingly the case as technologies and their adoption mature, as I observed at a public policy conference on radio spectrum hosted by the Westminster eForum in London last week. There was much talk about the release of various new spectrum bands for 5G, including those at millimeter wavelengths and with prospective new business models in their deployment by operators. In Q&A, one delegate rationally noted that to "wait and see" how others do with 5G in leading nations such as the U.S., South Korea and Japan might be the best strategy, given the UK's disappointing experience with 3G between its initial commercial introduction [from 2003]until HSDPA, followed by the iPhone, were introduced several years later. Indeed: great benefits - including lower risks and costs - can be derived by waiting for technologies, products and services to be developed and proved by others. But if everyone pursued that strategy nothing would ever get done.

Those that create in R&D and then prove new technologies in technical testing and in market development need and deserve adequate rewards in compensation for major investments and significant risks.

Not particularly surprising to those of us who work in the TCPA domain or are impacted by it, the published articles, blogs and such are mostly, if not all, written by attorneys in the defendants’ bar. I reckon those in the plaintiffs’ bar like to keep their opinions, musings and strategies to themselves until the litigation process begins. I provided some TCPA background and context in a previous article, TCPA: Facebook v Duguid, but will repeat some of that here to refresh your memory.