School Liability and Negligent Supervision of Children with Disabilities 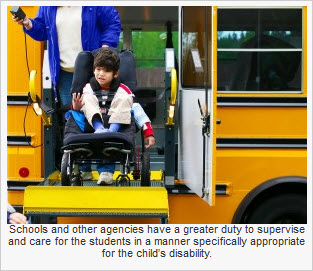 For schools, daycare centers, after-school programs, and camps, children with disabilities often present significant supervisory challenges. If these children's needs are not adequately addressed and a child is seriously injured or killed, negligent supervision may be viewed as a proximate cause. But what constitutes reasonable supervision of children with behavioral or physical disabilities? It depends on the unique needs of the student and a school's standards for protecting that student from harm.

Students with developmental disabilities, autism, mental illness, or a physical disability require specialized programs and services, highly qualified personnel, or one-on-one assistance to protect them from harm. Thus, when a school is aware of the characteristics and needs of a child with a disability, its duty to supervise the student in a way that ensures his safety extends beyond the professional standard of care for the general student population. A student death or serious personal injury stemming from a failure to adhere to this higher standard may constitute negligent supervision and render the school liable for damages.

Consider a school or other agency that enrolls a child with behavioral or physical conditions that require specific interventions to keep him safe. In this case, the school or agency's duty to supervise exceeds general or even specific supervision. General supervision is provided in a situation like recess on the playground, where two or three teachers supervise a group of students. Specific supervision is required when a student is engaged in an activity that presents an inherent danger if the student doesn't receive careful instruction, such as the use of power tools during woodshop. For a child with a disability, however, the standard of care extends to a much more child-centered, individualized focus. In liability cases, the known characteristics of the child's behavior or physical limitations frame an assessment of the reasonableness of supervision.

Is it reasonable for an elementary school principal to assign three playground aides to supervise 85 fifth-grade children, none of whom have any special needs, on a fenced-in playground after lunch? Is it reasonable for a residential treatment center administrator to approve an afternoon walk in a forest with 15 children and one teacher with the knowledge that one of the children has a history of running and leaving the protective supervision of staff?

The answers are "yes" in the first example and "no" in the second.

The Individuals with Disabilities Education Act requires that a child with a disability who qualifies for special education and related services must have an individualized education program (IEP) tailored to his or her needs. When the child exhibits behavior problems that interfere with her education or the education of others or that might cause injury to her or other students, the IEP must include a behavioral plan. Once the school identifies the behavior issues and an intervention plan is developed, this becomes the professional standard of care specific to the student. The IEP addresses the type and level of supervision that the school has determined necessary to protect the child from harm.

Because the child in our example above has a history of running off during class trips, the appropriate professional standard would likely require that an additional aide accompany her on trips. If another child has a history of getting out of his seat on the bus, running up and down the aisles, and distracting the driver, the appropriate professional standard of care might be to assign a bus aide to him.

If the defined standard is breached and the child or others are injured, that breach might be considered a proximate cause of injury - and the concept of sovereign immunity would not apply. In the absence of immunity, courts have held upheld student injury lawsuits stemming from the negligent failure to provide a reasonably safe environment or adequate supervision.

Last month, a 12-year-old student with autism disappeared from a Bronx, N.Y. school for hours before he was found in Times Square. He left his classroom and was seen running down a staircase. The details of this student's history are publicly unknown, but if the school had any prior experience of this student leaving his classroom unsupervised, it would have been the school's duty to provide individual close supervision for the student. It might have been necessary for a classroom aide to be with him, one-on-one, during the day to supervise his movements through the school. The school had an obligation to consider the student's capacity, determine whether any related behaviors would likely place him in harm's way, and take reasonable steps to prevent harm through appropriate supervision.

In this case, the student was found and no harm came to him. But his story could have been much different, as with the case of Avonte Oquendo, the 14-year-old boy who slipped past a security desk and disappeared from his Queens, N.Y., school last October. Oquendo, who has autism and cannot speak and was missing for months before he was found dead. The investigations into the circumstances of both cases continue.

In another example of potential negligence, the City School District of New Rochelle, N.Y., was ordered last August to pay compensatory damages after it failed to evacuate two students in wheelchairs during a fire emergency. The U.S. Attorney for the Southern District of New York found that New Rochelle High School violated the Americans With Disabilities Act in not having an evacuation plan for students with mobility impairments. The students, one of whom has cerebral palsy, were left in a third-floor classroom while the rest of the school was evacuated. School officials, who have contested the U.S. Attorney's findings, said their plan for dealing with students with disabilities in an emergency was to get them to a "safe room" where first responders can find them, but the safe room closest to the students required maneuvering down stairs. New York State law, however, requires a full evacuation during an actual emergency.

Even if the school had been found in compliance with the law, clearly, this plan was inadequate for a child in a wheelchair. The school had a duty to consider the students' disabilities and their inability to navigate stairs, and to plan adequately for their evacuation in the event of an emergency.

Though a school has a higher duty to supervise students with special needs, not every student injury is the result of negligence on the part of the school or its personnel. Again, liability depends on the circumstances. Let's take a look at two cases.

In Montana, a teacher had forbidden a developmentally disabled student from using certain equipment in the playground. Her "rule" became the professional standard of care specific to this child. On the day he slid down a pole on this equipment, fell, and fractured his tibia, his teacher was absent. At the time of the accident, the substitute teacher and another were on the playground supervising students. The boy's parents sued the district for failing to supervise their son properly. A jury determined that the substitute teacher had not acted negligently and held for the district.

The parents appealed to the state Supreme Court, which observed that a verdict cannot be reversed when it is supported by substantial credible evidence. In this case, the substitute teacher testified that she was watching five students - all of whom required special attention. All parties agreed that the substitute teacher had a duty to supervise the student closely. However, the fact that the substitute had failed to see this student climbing the equipment did not constitute a breach of duty (Morgan v. Great Falls School Dist. No. 1, 995 P.2d 422 [Mont. 2000]).

In this example, the professional standard of care was that the student was not to play on the equipment. However, the focus in this case was not this standard, but on the general supervision that was provided at the time. Regardless of the standard, the court determined that because the substitute teacher was providing supervision, as required, the school was not liable for his injury. In other words, the teacher was doing her job. Would the result have been different if the complaint focused on the playground rule set by the teacher and the duty of the school to ensure that the substitute teacher enforced the rule?

In Louisiana, a student with spina bifida and hydrocephalus was unable to walk. The school provided transportation in a specially equipped bus. A bus aide was required to secure the student in the wheelchair with a lap restraint, but neither the wheelchair nor the bus provided the means of securing his upper body. After picking up the student, the bus driver backed the bus into a car as his mother watched. She asked the child if he was hurt. The boy didn't respond, and the mother permitted him to continue to school. When he returned home with a bruised forehead and complained of head and back pain, however, the family took him to an emergency room. The family sued the school board, seeking reimbursement for treatment costs. A court found the school liable for the boy's injuries.

In this case, would the student have been protected from harm if the child's upper body had been secured? More than likely, he would not have been injured. This raises an important question: Would a reasonable person know that if the child's upper body was not secure in his wheelchair and there was an accident, the child would likely become injured? If injury is foreseeable, it is the responsibility of those in charge to assure safety. This student's safety could be reasonably assured if those in charge had provided him with a wheelchair and a bus equipped to secure him both across his lap and upper body.

When schools and other agencies responsible for the care of children have knowledge that a student's behavioral or physical disability may place that student or others at higher risk of being seriously injured or killed, they have a higher duty to supervise students in a manner specifically appropriate for the child's condition. A reasonable standard of care is tailored to the student's unique history and needs. Failure to establish and follow such a standard may leave a school liable in the event of a casualty.

If the symptoms of a child's disability suggest to a reasonable person that the student might be injured or even killed without special supervision and the responsibility for providing it is not carried out, the school will likely be held liable in the event of a student death or injury. If, on the other hand, the school provided an appropriate IEP and level of supervision but an injury still occurred, the school is unlikely to be held liable. Assessing the individual characteristics, emotional, and physical needs of students with disabilities and developing an appropriate safety plan is a clear duty of the school.

The Essential Self: The Key to a Life of Passion, Lasting Joy and Fulfillment

A Woman's Odyssey Into Africa: Tracks Across a Life